Politics as usual in California

UPDATE - SB 250 passed the California Senate today by ONE vote. Now it goes to the Assembly, where it will be more difficult to defeat.
______________________________________________
The California State Senate Majority Leader, Dean Florez (D - 16th District) has done an end run in his bid to score points with the Humane Society of the United States. Due to the adverse fiscal impacts of SB 250, a 'one strike' law that requires the spaying or neutering of any dog whose owner is in violation of dog laws (except barking), Florez has shifted the enforcement costs to local municipalities - an end run that lets him claim that it has no impact on the state budget.
The Hayden Act already requires the state to re-imburse local municipalities for the costs of enforcing mandatory state animal control activities. This costs the state $25 million a year. But wait -- the state has already said that they will not be able to pay these claims for at least four years. Now Florez wants to add to that by end running the Local Government Committee and bring SB 250 to the Senate floor without a proper hearing before that committee.

at left, Senator Dean Florez poses with Jennifer Fearing, HSUS lobbyist
Flores has moved to the left on the Animal Rights issues. From his own press release in May of this year... "Jennifer Fearing, a lobbyist for the Humane Society of the United States (HSUS) and one of the chief strategists behind last year's Prop. 2, said this (the realignment of the Senate Ag Committee when Florez assumed the chairmanship) was a big part of the reason for the revamping of the committee. She and her boss, HSUS president Wayne Pacelle, sat down with Florez in December to talk strategy." Damn, I thought I recosgnized the langauge in SB 250 - pure Wayne Pacelle.
Earlier this month - on Wednesday May 19th - Senator Florez appeared with officials of the Humane Society of the United States to debut a new film targeting the food industry. Florez pushed through two other bills - to prevent tail docking of dairy cattle and to force egg farmers to provide larger cages, winning the praise of HSUS chief executive Wayne Pacelle, who said,"It took 100 years to get farm animal legislation moving, but we got two bills within 10 minutes," They must be the best of friends by now.
Hey, DEAN we know you are preparing a run for the Lt. Governorship in 2010, and that a partner like HSUS - with a $120 million annual budget to spend on pushing their animal rights agenda - would be a fine partner for you. My question is... what is it going to cost US, the citizens of California?
Posted by Mike Spies at 1:59 PM 2 comments:

Bob Welch of WingWorks provided some additional photos of the construction of the dogbox/fiberglass cap that he built. He also sells the complete doors shown in the photos at a reasonable price. He has promised some drawings, too.
Here is the rear view with the back wall removed, allowing a look at the interior of the rear two boxes. Note the open rubber matting in the bottom of the boxes... this and an armload of grass hay keeps the dogs up off the bare, cold  aluminum floor. Easy to clean, too. 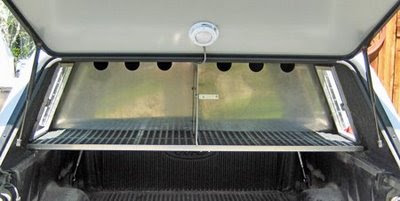 Below is the view of the internal partition showing the careful scribing and cutting for a close fit against the carpeted interior of the ARE shell... 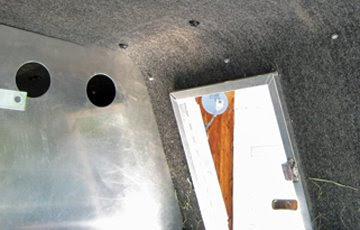 This is the rear wall divider removed. Note the 'L' bend at the bottom that allows for attachment to the floor of the kennels. Bob built with 'L' bends and angle brackets with bolts and Nylock nuts to make assembly and disassembly quick and doable at home. 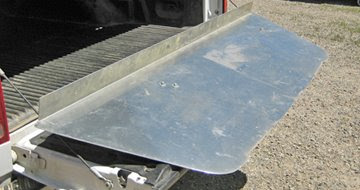 I am assembling parts and ordering an ARE shell for my pick-up. Hope to have one like this built in a month or so. I'll post some pictures.
Posted by Mike Spies at 9:46 AM 3 comments:

My old Ford Expedition is getting long in the tooth with 185,000 miles under it. It required two stops at Ford dealers (Havre, MT and Lewiston, ID) last Fall while on the road. So today I bought a 'like new' Ford F350 Super Duty crew cab turbodiesel (7.3L) with 65K miles to replace the Expedition as my hunting truck. It has all the whistles and bells that the Expedition has, but has decidedly more life in it.
Next on the agenda is a capper like the one that Bob Welch built, and outlined in the post earlier. Then I will go to work on the Airstream getting ready for Fall.
Posted by Mike Spies at 7:48 PM 6 comments:

ABC Atlanta on HSUS and their money... watch it!


Sorry, you cannot watch this video - it seems that the ABC affiliate in Atlanta has caved in to pressure from HSUS, removed this report from their archive, and demanded that YouTube remove it from their site under threat of copyright litigation. It is a sad day when the free press loses it's nerve. This was a fair and accurate report, and you can find a transcript of it HERE.
Posted by Mike Spies at 8:03 AM 1 comment: 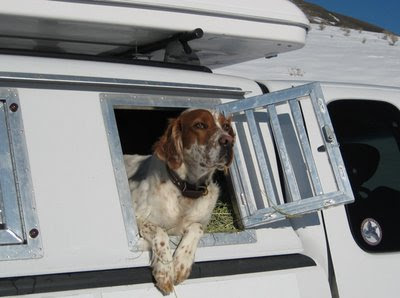 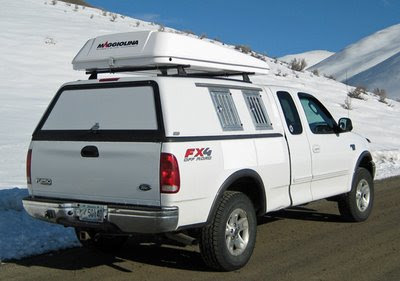 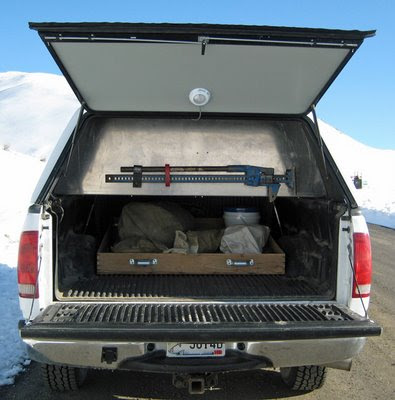 Bob Welch of Hailey, ID sent me these photos of a dog box he has recently completed. Starting with a 'blank' ARE fiberglass shell and a pile of sheet aluminum, he crafted a very good looking and utilitarian topper for his F150.
Since I am in the hunt for a 'newish' Ford F250/350 7.3L turbodiesel truck, I have been quizzing Bob for more information. Hopefully he will forward some diagrams or sketches along with some construction details.
BTW, the "pod" on the top of the camper is a pop-up roof top camper, complete with 3-1/2" thick mattress and electric light. Bob likes his comfort.
EDIT -- Added the photo of the rear view with the tailgate open. Lots of possibilities for this design... water tank, full drawer system, aux battery, pop-up remote control roof vent...
Posted by Mike Spies at 12:04 PM 7 comments: 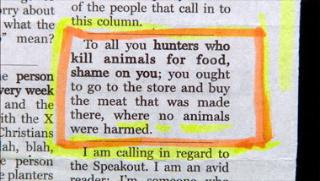 I went over to Scampwalker's blog -- 8 more miles -- and was amused. He seems to have his material in a group. Above is a sample... I laughed until my posterior detached due to the retro rockets firing. Check it out.
Posted by Mike Spies at 7:48 PM 1 comment:

"Political correctness is a doctrine, fostered by a delusional, illogical minority, and rapidly promoted by an unscrupulous mainstream media, which holds forth the proposition that it is entirely possible to pick up a turd by the clean end"
Thanks to Craig Peters for sending this along.
Posted by Mike Spies at 10:34 AM 1 comment:

SB250 is not going away - action needed!

In a nutshell, the current SB 250 - introduced by Senate Majority Leader Senator Dean Flores of Bakersfield - is an ugly piece of legislation. This is a "One Strike" law that would require the spaying or neutering (at the owners expense) of any intact dog for any infraction of the dog or owner, except excessive barking. It would also require that any OTHER intact dogs of that owner also be spayed or neutered.

So, if your dog is unlicensed, gets loose for any reason, or is the subject of any complaint, you are guilty, and your dog(s) will have to be altered - and you must pay for the surgery - before you get them back from the animal control agency.

There is no legal recourse, as the only appeal provided in SB250 is the animal control people who are charged with enforcing the law!

This is a Draconian piece of legislation that has the finger prints of the HSUS all over it, and reeks of politics, as the sponsor is leveling his sights on a run for Lt. Governor in the next election.

Write a letter (not an e-mail) and fax it to every politico in Sacramento, starting with your own state Senator. It is time to deal another defeat to HSUS.
Posted by Mike Spies at 5:12 PM No comments:

From an earlier time 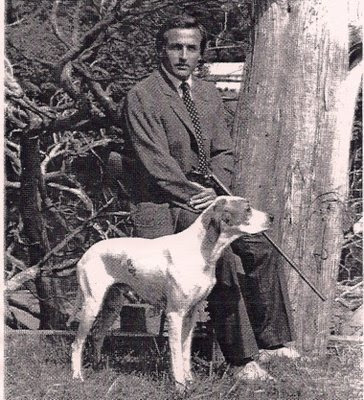 My friend Paul Garrett of Denver recommended Jack Harper's book, Bird Dogs and Field Trials. He even located a copy for sale by a used book specialist. So, of course, I bought it.
Inserted between the pages I found the photo above. Obviously a well heeled young man (note the slim 20 gauge side by side) who bears a striking resemblance to Dennis Hopper. A younger Dennis Hopper, anyway.
I wonder who he was? Or is. What are the bloodlines of that pointer? A mystery.
I'll review the book soon, but I need to read it twice.
Posted by Mike Spies at 6:46 PM 3 comments: