Worked Maggie on planted chukar today for the first time.  She liked them.  Apologies for the poor-quality cell phone picture.  Found that my camera had a dead battery.  Her tail position was generally better than this, tapped the button at just the wrong time. 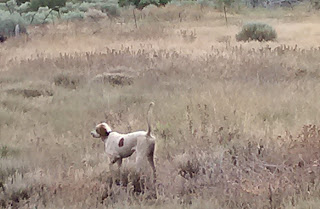 ﻿
Her first point was at 200+ yards.  I was working her quite a ways downwind of the planted bird, just getting her into the flow, when she stopped 100 yards from me.  At first I thought was just stopping to pee or poop, but then I got a bit closer and she was clearly pointing.  Looked at the trap and the wind direction was perfect.  Released her and she relocated 50 yards below the bird, held staunch until the flush.  Very gratifying.  Huns and sharps should be trembling.

Was out with a friend who is training his first pointing dog (a GSP) after many years of handling and competing labs.  His pup has been moving after first scent, sliding closer to the bird, and creeping even after stopping.  Today we used a launcher and blew out the birds immediately when the pup scented but failed to lock onto a point, and immediately hit him (gently) with an e-collar.  Did that twice and the pup showed very nice manners on the next couple of birds.  Pleasant to see training come out well.

Really pleased with the weather.  Should have been 80+ degrees, even where we were working at 6,000 feet, but a storm is coming through with lower temps, humidity, and a nice breeze.  Sweet.
Posted by Peter Houser at 2:27 PM 1 comment: