I returned from a trip to Arizona on Wednesday and found a surprise in the mail - a book sent by John Yates' widow, Donna Yates. The book is Wolfspeak - the collected works of John Yates - vol. 1. 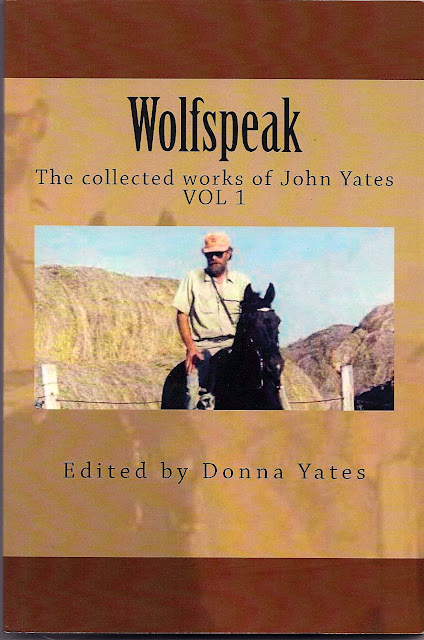 John was a friend, a writer, a breeder of English setters, a trainer, a contributor to Field Trial Magazine and this blog, founder of the American Sporting Dog Alliance, and a good man who fought the good fight until his death from cancer on September 15, 2009.

John helped me get Ted started and we ran dogs together in Oklahoma, then continued our friendship through frequent calls, e-mails, and work on issues confronted by the ASDA.

I did not know that Donna was working to assemble and publish John's writings until this book arrived. I started reading immediately. I'm impressed. Here's a small sample of John's bird dog wisdom on unproductives:

Unproductive points are the bane of many field trial dogs and have cost many good dogs placements. An unproductive means that a dog is found on point, but the handler cannot produce a bird. They are also called unproductives or barren stands.

While there is no written rule about unproductives, the rule of thumb for most field trialers - and most judges - is that one doesn't hurt you, two hurt a lot, and three are fatal.

All pointing dogs have unproductives on occasion, and most dogs will have an occasional bad day with several. When this happens, a handler simply shrugs and figures that his or her luck will even out at next week's trial.

Other dogs will go through a period during their development when they are prone to unproductives, but will grow out of the problem with patience and time. These dogs also are not of great concern to a trainer.

The dogs that we have to worry about are the ones that consistently have a lot of unproductives.

Our first job is to figure out why, then how to deal with it.

Figuring out why is the hard part. That is because trainers often don't know what has happened when a dog is found on a barren stand, and because I have never yet met a trainer who had a decent nose compared to a dog.We simply can't smell what a dog is scenting.

Thus, there are no easy rules for dealing with unproductives. To handle them effectively, there is simply no substitute for experience that will allow a trainer correctly interpret a barren stand. WIthout the the perspective gained by understanding, it is likely that a trainer will do the wrong thing at the wrong time...

To get the rest, get the book - $16 on www.createspace.com or on Amazon.

Walking in the San Diego hills

We had a very good walk this morning in the Lagunas east of San Diego.  Left the car just as the sun came up, spent about 90 minutes working the chaparral edges, and got into a bunch of quail in both small groups and larger coveys.  My 5-month-old setter Maggie had a wonderful romp and the Astro proved it's value again.  In the brush she was hidden 75% of the time and the Astro kept me calm.  I never saw her point but she was definitely interested in the quail.  She jumped into one big bush and three quail quickly exited.  She was still sniffing the ground under that bush as I walked up.

I also pronounce her to be gun savvy.  I've been firing a blank gun in the field for several weeks now and she has not been worried.  Today we graduated to .32 blanks and still no adverse reaction.  When we were done walking and the pups were kenneled I fired one more blank into the air from about 10' away (Jim Marti's final test).  No problem, I can check that box.
Posted by Peter Houser at 4:04 PM No comments: 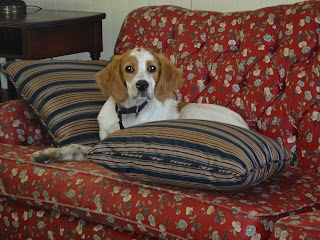 Dogs are allowed on one couch in our home.  This is not it.

But Maggie is doing very well.  Runs boldly in the field, stays to the front, responds well to "here", flash points interesting smells.  Shows no response to my blank gun.  And is pretty cute to boot.
Posted by Peter Houser at 9:19 PM 2 comments:

I get a boat

I recently bought a fishing boat - an eighteen foot Parker center console. I love to fish, and living where I do there are few places that I can get to, fish, and return home the same day - unless I have a boat. 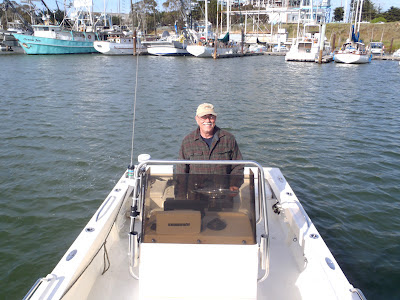 They say that a boat is a hole in the water into which you pour money - kind of like field trialing. In any case, I have the boat and will now start fishing one or two days a week.

Pete, Bob and I will be taking the boat to Baja del Sur in June for a bit of fishing, cerveza, and Mexican food. 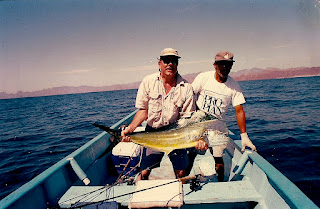 I have fished his area before and the fly fishing should be very good for dorado, tuna, roosterfish and several other gamey species. Now I want to do this in my own boat, under my own steam. We are pumped for the trip...