Valley Quail hunting is tough in Southern California this year.  I got out a couple weeks ago, in good cover, and found no birds in a few hours of hunting.  Tried another good spot today that usually holds one or two good-sized coveys.  Found three birds, apparently the remains of a covey.  In some ways that is even more discouraging - I found the birds that were in the area, just not many of them.  They flushed wild, individually, and though I had shots I kept the gun down.  Let them go and hope for more rain this winter.

Good news was that Maggie made a nice point on a hot spot.  If there had been a single I probably would have shot it for her.

The Imperial Valley is a different story.  Last weekend a buddy and I found several coveys of Gamble's Quail on the edge of the desert.  They feed in the edge of the fields and then jump back into the thick stuff quickly.  We did get a few shots and killed a couple of birds.

Also found LOTS of mourning dove.  Walked one field and must have pushed 500 or more into the air in front of us.  This time of year they are very spooky and the shooting was tough.  Also had collared dove coming by very high.  Dumped a couple of them and felt quite pleased, though the percentages were not good.

And whacked one pheasant, an old guy with long spurs.  Took 4 shots to knock him down.  My second barrel did the trick, a high-speed load of #6 in my 12ga.  It was a long shot and I was pleased with that one too.

Could have had a couple of ducks too.  Found a small pond on the GPS, walked through the tules to get a look thinking "there could be ducks here", but the gun was filled with dove loads.  Dumb.  Four mallards got up 10 yards away from me, easy shot if I had been carrying my 12ga with loads of tungsten matrix.  Not sure how I would have retrieved those birds though. 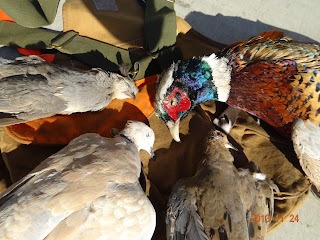