I noticed a short article in yesterday's SF Chronicle - looked it up today and it has already passed the legislature and is waiting for a signature by Governor Brown. First time I have seen the legislature act quickly on anything.

From the Santa Barbara Independent minutes ago:

A bill that would ban all lead ammunition for hunting statewide by 2019 — making California the first state to do so — has passed the State Legislature and is sitting on Governor Jerry Brown’s desk.
The bill, officially known as AB 711 and cosponsored by Assemblymember Das Williams of Santa Barbara, would see the state’s Fish and Game Commission set regulations by July 1, 2015, that phase in the use of non-lead bullets for all hunting. The requirements would be implemented by July 1, 2019.
Will I have to retire my bird guns and buy a plastic quail gun?
Posted by Mike Spies at 9:25 AM No comments:

Which ones to keep?

I don't like to own guns that I don't use.  My current favorites are a 16ga A-grade Fox and a 16ga Lindner Daly.  Both are outstanding upland guns and they are likely to be my primary upland battery for many years.

But I have a couple of gorgeous British 12ga best guns  ... 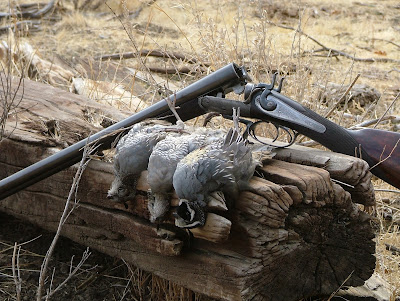 A Westley Richard droplock and a Purdey island lock.  I think they are among the most lovely guns ever built and I shoot both of them quite well.  But I have not shot them much for at least the last 5 years so now I am wondering if it is time for someone else to enjoy them for a while.  No one really owns guns like these, you are just the caretaker for a while, and eventually it is time to let go.  Something to ponder over the coming months.

I got out for a walk with my pups this morning east of San Diego.  Temps had finally dropped a bit and we had a couple of nice hours.  Then Maggie ran out of gas quite suddenly and, a few minutes later, lay down with mild convulsions.  That scared me a bit so I walked / carried her back to the car as fast as we could get there.  Headed straight to the vet and found that her blood sugar was 53; should be between 75 and 125.  Went home and got some glycocharge and some food into her, this afternoon she seems to be fine.  The vet is going to do comprehensive blood work but I suspect I just need to carry some glycocharge with me on walks over an hour or so.  Anyone else have similar experiences?

On a related topic, I've been using electronic maps from Hunting Maps USA for a couple of years and they have really paid off.   This morning I was on national forest land that a couple years ago I thought was private.  It was a lovely valley, ringed with oaks and chaparral; we pushed a covey of quail and saw a small flock of turkeys.  Those who prospect best find the most birds, and these maps really help the prospecting.
Posted by Peter Houser at 4:41 PM 2 comments: