A couple of weeks ago I tried something entirely new - dog sledding. My daughter, Liz, lives in Minneapolis and invited me to join her for a long weekend in the northern part of her state. We had a blast and I recommend it to anyone who has a chance.


Like bird dogs, these pups were incredibly eager to get out and do the work for which they were bred. They were trememdously fit, capable of pulling the sled for 3 hours straight, then reluctantly taking an hour break for lunch, and then pulling for another 3 hours. Temperatures had warmed to the 20's and the guide said that this cut their endurance!
Liz's boyfriend's family hunt waterfowl and grouse and have a couple of nice labs. Next fall I may try to arrange for a visit to the woods with them - I'll promise to bring a couple of nice setters.
Posted by Peter Houser at 8:01 PM 3 comments: 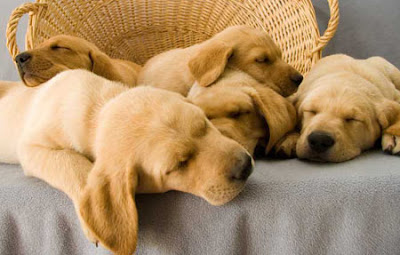 While the animal rights people pound away on spay and neuter legislation they say will "reduce the population of unwanted puppies in shelters", there are a couple of things that need to be borne in mind...
1. Puppies are almost always cute and adoptable. In fact, in many areas of the country there are not enough puppies available for adoption to meet the demand. This has led to shelters importing puppies from other states, or even from foreign countries. Adoption will absorb almost all 'unwanted' puppies - if an effort is made to get them to the people who want them.
2. Most dogs are surrendered to animal shelters due to problems with the temperament of the dog, housebreaking problems, destructiveness, or aggressive type behavior. And, yes, this includes puppies adopted from shelters. Puppies, with any luck, grow into dogs and they may not be so cute and cuddly at 2 years old as they were at eight weeks. Additionally, owners usually create their own problems through neglect, lack of time and attention, and plain ignorance of what a dog needs to be a successful pet. Before deciding to get a dog or puppy, which usually entails a 10-15 year commitment of an owner's time, money and emotions, they should take the time to think about and ask themselves if they fully understand what dog ownership requires.
This is an puppy distribution and owner education problem, not a population problem. What is needed is a positive effort to get puppies to those who want them, and to educate owners before they get a puppy. What is not needed is a punitive, heavy-handed bureaucracy put in place by ignorant, if well meaning, lawmakers.
Posted by Mike Spies at 10:02 AM No comments:

SB 250 - Mandatory Spay/Neuter in California is back! 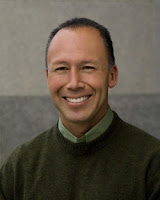 AB 1634 - the mandatory spay and neuter bill introduced by Senator Lloyd Levine and defeated after a prolonged struggle over the last two years is back - this time as SB 250 - introduced by Senator Dean Florez (Democrat., Fresno/Bakersfield). Kern County, the core of Flores' constituency, has the worst shelter kill record in the state. They kill a lot of adoptable dogs in Kern County.
The name has been changed, but it's the same old crap. In a state that is struggling with huge revenue shortfalls and divisive politics do we need to pursue these costly, frivolous and punitive attacks against the property of the taxpayers? While school districts are laying off teachers are we going to be hiring more dog catchers? Apparently so.
Senator Florez' website provides a bio that includes this description of his areas of activity...
Florez has been an outspoken leader in the areas of clean air, equality in education, food safety, animal rights, high-speed rail, government accountability and infrastructure financing and development.
I guess that "Animal Rights" includes mandatory animal mutilation. Right?
He bills himself as a finance professional and is a Harvard MBA graduate. He is Majority leader in the Senate. Perhaps he chooses to ignore the burdensome costs that this proposed law will place on municipalities (already over-stressed), enforcement professionals and the dog owning taxpayers of California - who are already seething over the mismanagement and new taxes being levied on them in Sacramento by a predominantly Democratic legislature. Do I smell revolt in the air? I sure as Hell hope so!
Here is a link to the text. Please read it, get mad, and fire off a letter to your California State Senator in opposition. Then go on strike. The idiots in Sacramento are living in a dream world, and this is another piece of compelling evidence.
Posted by Mike Spies at 9:20 AM 1 comment:

Hopefull about next year

I found a helpful site for California precipitation:

The Lake Isabella area is right on average so I can hope for some quail in the Western Sierras next year (this past year was pretty meager). Sadly, the numbers in the Owens Valley are not nearly as good so the chukar outlook remains dim. But there were some good storms in the north/central Sierras in early March so I'll stay hopeful until the April numbers are finalized.

San Diego is running close to normal for the year. If we can get one more decent storm this month I'll hunt locally next year. I have not done that for two years, though in past wet years (2005-2006 for example) I've had a few local honey holes that were pretty good.
Posted by Peter Houser at 1:07 PM 1 comment: 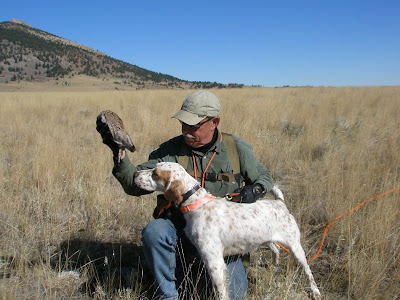 This is perhaps the second most popular dog training tool, second only to the check cord. A recent thread on a popular BBS was a discussion of experiences people had with e-collars. I thought I might repeat myself here...
I have become circumspect in the use of e-collars over the past several years, based on close observation of my own setters in trials and hunting.

I never put a collar on a dog under one year old, except for trash breaking.

I never nick a dog on birds anymore. I have seen dogs that anticipate the nick, and tense up and lower their front quarters when they expect that they MIGHT get nicked. This is not good for style around birds. I will correct the dog verbally and by hands on methods. I may go back to a check cord at these times.

If I can teach with a checkcord, I prefer it. I do use the collar to re-enforce training. I use the lightest setting I can still get compliance with.

By the time my dogs are three years old, they do not need the collar... I am moving towards running my dogs without e-collars once they are well trained. I think I get better performances in the bird field without a collar.

If I was a professional trainer, I might use the collar a lot more and earlier, in order to train more dogs, faster. But I am not in a hurry, and REALLY dislike the idea of moving a dog to breaking STWS before they are totally ready for it.

Patience is the best training tool.
Posted by Mike Spies at 5:05 PM 5 comments:

I think Spring has arrived. I have not posted in a while and thought I would do something today... 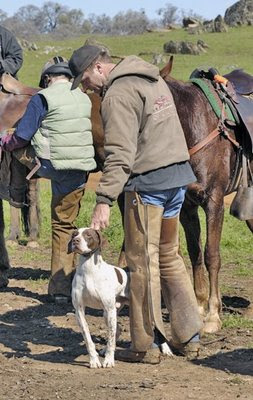 I attended the West Coast Shooting Dog Championship on Friday and Saturday. Didn't run a dog, but helped out where I could, and enjoyed seeing some fine dogs run. Here is a photo of Sean Kelly readying his dog for the start of her brace. It turned out that Sean won the Championship with an excellent performance from his dog in this brace.
The Brooks Ranch is in the foothills of the Sierra Nevada mountains near Jamestown, California. It is a beautiful piece of ground with rolling, oak studded hills and native valley quail.
I am getting Ted ready for a walking shooting dog stake at Setter Springs Ranch next weekend. I will post some when I return.
Posted by Mike Spies at 2:47 PM 3 comments: