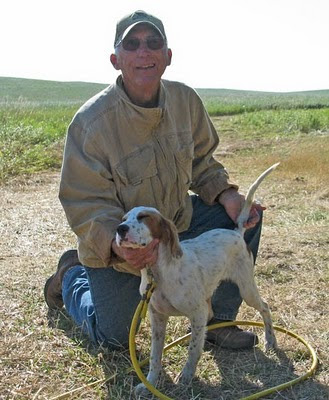 Jerry Lewis poses Cody in North Dakota
On Tuesday of this week, I was in Beach, North Dakota at Jerry Lewis' summer training camp to look at some puppies. We put three pups down and walked them through the fields. One of them was consistently ahead of the others and to the front, handled naturally, and found a covey of sharptails, which he flushed and chased a short distance. Then he rolled back and checked the spot again and put up two more birds. "I like this pup," I thought, "he really hunts!" and after a brief once over to check for any physical problems, Jerry and I made a deal and started the paperwork.
After leaving Jerry's camp, I headed over to see some dogs at the Montana Shooting Dog Championship in Circle, Montana. Jim Michaletz had a horse for me to ride, and I rode six braces on the spectacular course that the Big Sky Field Trial Club has on the Scott Brown Ranch. I met a number of people I knew only by reputation and phone and e-mail exchanges - Jim Michaletz (owner of my new pup's sire, CH Jetsetter), Tom and Shannon Nygard, Austin Turley, Dave Noel, Jim Tande, Doug Ray, Travis Gelhaus, and others. Everyone made me welcome and I am grateful to all there for an excellent time. After the morning braces, I remained in camp and walked the pup in a little field behind the camp. He found, flash pointed, and flushed a bevy of sharptails and, as he did the day before, went back to the spot and found three stragglers, which he also put up. I was impressed with this determination and good sense in a pup just turned five months old.
So this is Cody (CH Jetsetter X RU-CH Johnny's Jewel - and to be registered as Wenaha Code Red). I have the hope that we all experience with a new puppy - at this point all things are possible.
Posted by Mike Spies at 3:12 PM 7 comments: 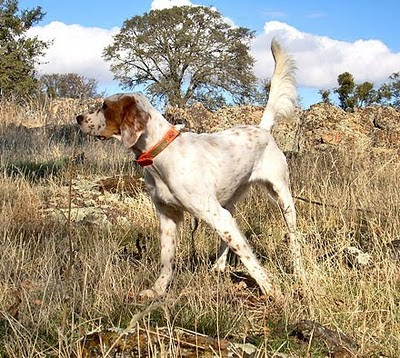 Heading out on Sunday for North Dakota. It's always a crap shoot with a young pup, but I think that raising and developing a young dog is very rewarding and I am anxious to get started.

The pups I will be looking at are a repeat breeding of a nick that produced Terry Erickson's young prospect, Horizon's Jetsetter, pictured above at about 9 months of age. She is a nice, smooth moving pup that seems to have what it takes. Her littermates look as nice and are all very similar.
Posted by Mike Spies at 11:03 AM 1 comment:

Last week I had to put one of my older setters down. A simple bowel obstruction, upon closer examination, led to a sarcoma on the spleen and a unhealthy looking node on a testicle. Rather than put him through a bowel resection, spleen removal and castration with a very dubious prognosis for short term survival, I elected to let him go. This is not easy. Every time I do this it seems that the grief is compounded by the dogs that went before. Benny was a really sweet little maniac. So desperate for birds that I could never trust him completely, and eventually quit hunting him. He was my wife's pet and favorite.
So next week I am making a trek to North Dakota to the summer camp of a well known trainer to evaluate three young puppies. I expect that I will come home with one, if they are like the others I have seen from this breeding. I will have a young dog to develop, and I am excited about the prospect of taking the youngster on my fall bird safari.
On the way home from North Dakota, I will stop in Circle, Montana to ride braces at the Montana Open Shooting Dog Championship and meet both old friends and some people that I have only known previously through phone conversations and exchanges of e-mail.
Pictures of puppies, dogs, and field trial to follow.
Posted by Mike Spies at 1:19 PM 9 comments: 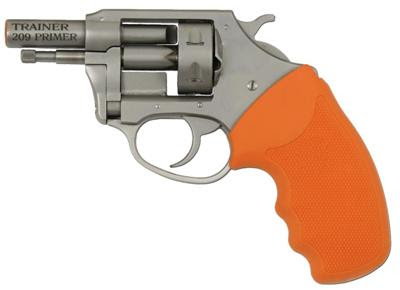 The Gun X training pistol is a recent entry into the market that has generated a little discussion in the last few months. I've had the chance to see and use one the last couple of weekends. My impression is that it's very well made and to this point seems quite reliable. It feels much more like an NEF than an ALFA with the overall weight between the two. If I hadn't recently purchased an ALFA, I'd have one of these in a minute.

Fishing the Sierra back country

Our extended family & friends spent the past week camping in the Sierras (near the Pickel Meadows Marine Corp training camp for those who know the territory). My cousin and I both purchased float tubes before the trip and made a couple of day hikes to lakes that were a bit off the beaten track. An uninflated float tube fits perfectly within an old external frame Kelty. I'd never tubed before and had a great time floating the lakes, mostly tossing nymphs (thanks Mike).

However, the trout were not cooperative. We both caught plenty of small rainbows on flies in the local rivers but could not even get a strike in the lakes. Finally I gave in to frustration. I switched from my old Pflueger to a spinning reel, attached a mid-size spinner, and began trolling the deep areas of the lake. The results we incredible ... 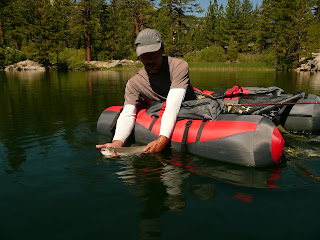 In the space of an hour I had three strikes and landed two trout, the first 17" and the second 18", each well rounded, probably weighing a bit over two pounds. Prior to this the biggest trout I had caught in the area was 13", and the biggest I had ever heard of was only 15". Wow.

The experience was bittersweet though. I nearly always catch and release in the Sierras but the second trout did not recover. I was using very light tackle (appropriate for the "normal" trout in 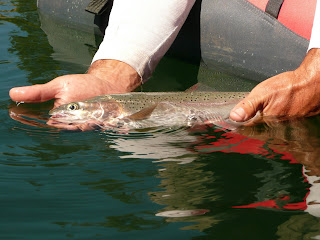 the area ) and the 5-minute fight exhausted this fine fish. I spent 10 minutes trying to get her swimming again but finally put her on a stringer. Back in camp, we shared the filets for lunch and they were delicious - orange and firm. I also collected 4 or 5 ounces of roe and will try my hand af making caviar.

Hope others are also enjoying these weeks before the bird season kicks off again.
Posted by Peter Houser at 4:09 PM 2 comments: