John Yates of the ASDA just sent me a link to a Parade Magazine (that's right! Parade Magazine) current on-line poll asking people to vote on whether they favor or oppose mandatory Spay and Neuter laws that are popping up like toadstools across America.
The answer? A resounding NO! from over 80% of respondents. Check it out HERE and vote.
Posted by Mike Spies at 9:17 AM No comments: 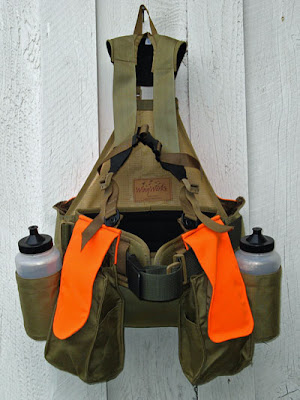 For many years I used a Filson Game Bag vest for bird hunting. It is a good vest - simple and durable. Then, in October of 2005, my friend Bob Welsh of WingWorks in Hailey, Idaho sent a new vest to me while I was on the Grande Ronde for the chukar/steelhead season. 'Course I immediately put it to work for a thorough try out.
Long story short - it is the best vest I have seen or used. Every aspect of the design shows that it was developed by a real bird hunter - the load rests on the waist belt (not your shoulders), you can stow a rain jacket without stuffing the game bag full,  you can put a bird in the game bag easily without shedding the vest first. It won't scratch your gun. You can put an entire box of shells in each pocket, get to them easily - and they will not fall out when you bend over to pick up a bird or scratch your dog behind the ears. And it comes with a separate lunch pocket and pockets for two 1-liter bottles - AND the bottles. The material and build quality are excellent - built in the USA. Contact Bob at Wingworks
Posted by Mike Spies at 11:40 AM 3 comments:

The Genetics of Pointing 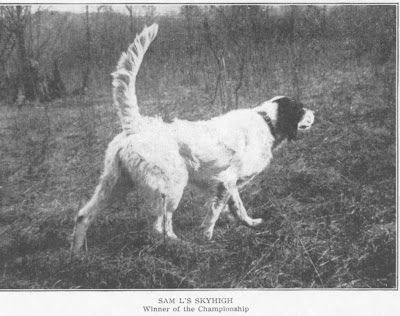 The American Field has an article in the March 15th edition by Mark Neff, PhD. of the Center for Veterinary Genetics, School of Veterinary Medicine at the University of California at Davis. The article, Genetics and the Natural History of Pointing, backgrounds the development of modern breeds, and pointing breeds in particular. Dr. Neff worked on the first Dog Genome Project at UC Berkeley.In the article he describes his current project to identify the major genes that contribute to pointing behavior. The genetic code of dogs was deciphered by a team from MIT and Harvard in 2005. This has provided geneticists with the coordinates of every gene in the canine genome.
According to Dr. Neff, the National Institutes of Health has a great interest in biological models of behavioral variation. This is well displayed in dogs, especially when looking at variations in  pointing behavior between breeds and individuals within a breed. Rather than try to summarize this excellent article, I prefer to quote some interesting comments made by Dr. Neff:
"The variation in pointing intensity that is observed today among breeds suggests an historical path that pointing genes took across Europe. Spanish and Italian dogs, for instance, exhibit a less intense point than English pointers (sic.) and setters. The former breeds may represent the origins of the instinct, whereas the later breeds may represent the full set of intensifying genes added over time."
"Samples from privately owned dogs is currently being recruited. We have classified breeds in a way that we believe reflects degrees of common ancestry and gene-sharing. The first class consists of breeds in which pointing instinct has been bred to fixation, such that all the dogs possess strong instinct... The second class consists of breeds with variation  in pointing instinct. Only the very best dogs are being recruited from these breeds. The third class consists of breeds with an even smaller fraction of dogs possessing true talent. These tend to be breeds that have become popular in the show ring, where just a few bloodlines appear to have retained the major pointing genes... These pointing genes are detectable with new DNA technologies that provide unprecedented power and resolution. "  The reason for this, according to Dr. Neff is to develop study groups with sufficient genetic variation to allow identification of the genes associated with pointing behavior.
Dr. Neff also poses these interesting questions, which may begin to be unraveled if his research is successful...
"What was the antecedent behavior in the wolf  from which pointing was derived?"
"Are there early experiences or environmental influences that strengthen the behavioral outcome?"
"Are there predictors of pointing intensity in puppies?"
Dr. Neff is soliciting DNA samples for the study. He may be reached via e-mail at: mwneff@ucdavis.edu
Posted by Mike Spies at 3:02 PM 2 comments:

I stumbled across this blog Camera Trap Codger and found it fascinating for two reasons - using the skill and knowledge of trapping and a camera to get some striking images, and that the blogger is a professional biologist who has some interesting advise and commentary.  He has also put together a training seminar in California for aspiring camera trappers. Since I grew up in the country and ran a trapline as a boy, I was hooked.
Added it to the links section and will check in from time to time.
Posted by Mike Spies at 10:14 AM No comments: