Here is a bit of the bulletin received today from Dr. Charlie Hjerpe DVM...
"I attended and briefly spoke at the Assembly Local Government Committee hearing on SB 250 this morning. There were a fair number of people present who opposed the bill, but nothing like the thousands that were there 2 years ago, when the Senate Local Government Committee defeated AB 1634. About 15 people spoke for the bill, and about 50 to 70 spoke against it, which was just about everyone there who was opposed..."
Regrettably, the committee passed the bill through despite the fact that not all the committee members were present. The final vote may be as soon as this week. We need those NO letters, faxes and phone calls from you.
Posted by Mike Spies at 5:54 PM No comments:

To  MDMNM blogging from New Mexico on Sometimes Far Afield. Good stuff, and the spirit of reciprocity demands that I bring it to your attention.
I really thought I had it on the blog roll... really.
A very worthwhile experience - have a look.
Posted by Mike Spies at 7:02 PM 1 comment:

Note on the Garmin Astro in Canada

EDIT: Craig over on ChiendogBlog has done the research (he's a Canadian, so they are more likely to talk with him...) regarding the exact nature of restrictions on the use of the Garmin Astro in Canada. Check it out HERE. Thanks, Craig!
Posted by Mike Spies at 7:24 PM 7 comments: 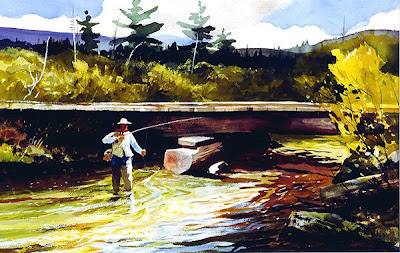 "Alder Brook" by Chet Reneson
I am always at a loss to determine when Summer officially begins. I went to Wikipedia, and remained unenlightened....

"In some Western countries, especially the USA, (summer is) believed to start at the equinoxes and solstices, based on a misunderstanding of astronomical reckoning. Thus, in the Southern Hemisphere, based on this premise summer begins on the day of the December solstice and ends on the March equinox. When it is summer in the southern hemisphere it is winter in the northern hemisphere, and vice versa. From a purely astronomical viewpoint, the equinoxes and solstices would be the middle of the respective seasons, but a variable seasonal lag means that the meteorological start of the season, which is based on average temperature patterns, occurs several weeks later than the start of the astronomical season. According to meteorologists, summer extends for the whole months of December, January and February in the southern hemisphere, and the whole months of June, July and August in the northern hemisphere..."
My take away on this is that summer begins when it starts to get hotter and is over when it starts to get cooler. So, in spite of cool weather here and in many parts of the West, it is now summer. OK?
In most states training on wild birds may not begin until July 1, in consideration of the Spring nesting period. A good thing, I think. But we can make sure that our dogs get exercise to keep them trim. Since I have setters, I am contemplating a buzz job to keep them cooler as the weather warms up. My wife hates it, but I suspect that it is a help to the dogs, especially when they are running. I am shopping for a quality clipper with the horsepower to make quick work of the coats of four setters. I have used horse clippers in the past, and they worked well. Any suggestions would be appreciated.
Summer means thinking about warm weather hazards to the dogs when out in the field -- heat is a killer, and there are rattlesnakes, foxtails, speargrass and other concerns in many areas. I like to exercise the dogs in the morning before it gets too hot. I have also found fewer rattlesnakes in the morning, compared to the number that seem to become active in the evening, after a hot day.
I always cut back on the amount of food I give the dogs during summer - usually by about 1/3, and I only feed once daily. Some people change the feed to a lower protein/fat food, but I continue with what has proven to work for me - Purina Pro Plan Performance. I just feed less.
Summer means trout fishing and preparing for the fall hunting season. I have been doing much of the later and none of the former. Right now I am getting the bits together to build a dog topper for the truck - I'll post some on this as I make progress. Also beginning to get my Airstream out of mothballs, and do needed work on it. I need to get out and do some fishing before it is too hot.
The painting above is by Chet Reneson. Chet is a very fine watercolorist, a gentleman, and dedicated outdoorsman. I have a number of paintings and prints by Chet, including a  Bahamian street scene that I gave to to my wife on a recent anniversary. Chet's wife Penny sent us a sheaf of originals to choose from. We picked out one we liked, and sent the rest back. Remarkable in this day and age, I think.
Posted by Mike Spies at 10:09 AM 1 comment:

It seems as though the California Department of Fish and Game has accepted $7,500 from HSUS - the premiere anti-hunting and animal rights group - and announced a 'partnership' with the East Coast-based animal rights organization. Read it Here.
Maybe they are planning on selling bird watching licenses... or maybe they are just selling out. Whaddya think?
Posted by Mike Spies at 3:02 PM 2 comments: 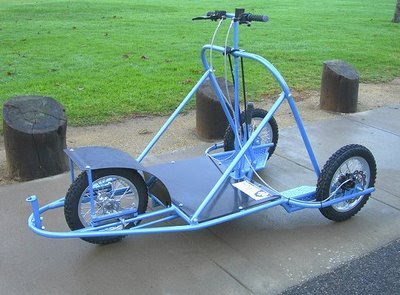 It is a long drive to my training grounds. But I do live very near a terrific trail system, and have been running dogs there on checkcords (no off leash dogs, and no four-wheelers, dammit). My usual loop is about 6 miles.
I have contemplated using my mountain bike to road dogs, but two dogs and a mountain bike = scrapes and scars. While thinking about a simple way to road at full running speeds, I searched up this dry-land mushing cart. Built by Arctis in California, this cart or something like it would neatly solve my problem.
Posted by Mike Spies at 4:38 PM 2 comments:

The 'old days' on film

Old b&w film portraying bird dogs and hunting in the US circa 1940. Times have changed. 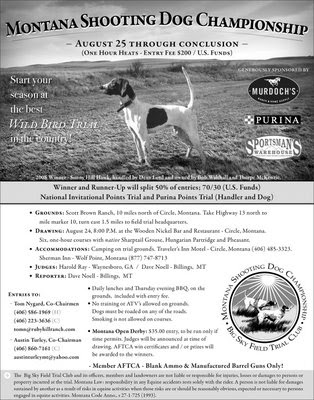 The Big Sky Field Trial Club is presenting the Montana Shooting Dog Championship in Circle, Montana, August 25th through conclusion. This trial will be held on wild sharp-tail grouse, Hungarian partridge, and pheasants. Click on the image above to view the announcement.
Posted by Mike Spies at 12:16 PM No comments:

If you define 'line bred' by looking only at the DEGREE of relatedness (which is essentially what COI indicates) then you are talking about the degree of inbreeding.

Thus, there is a BIG difference between line breeding and inbreeding, IMO.
Posted by Mike Spies at 2:32 PM No comments: 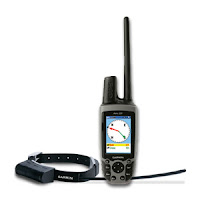 At the Summer meeting of trustees just completed, the AFTCA has approved the Garmin Astro DC30 for use in sanctioned field trials. So it seems that the American Field and AFTCA are now on the same page regarding the issue of use in trials. We will look forward to specifics of the rules governing the use of the Astro.
Good decision, I think.
Posted by Mike Spies at 8:25 PM 1 comment:

Bill Holtan of Kensal, ND has put together Field Trial Central - to track trial results across the country. This blog will publish results of major AF/AFTCA horseback and walking trials, including All Age, Shooting Dog, and Walking stakes - including Cover Dog, US Complete, NBHA, and ABHA.
Thank you Bill!
Posted by Mike Spies at 9:00 AM No comments: 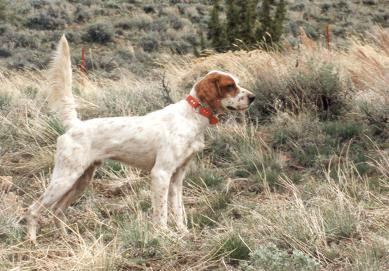 CH See Johnny Run passed away on June 6th at 17 years of age. He was owned by Terry Erickson of California, and lived with his trainer/handler Jerry Lewis in Kansas, and lately, Texas.
Johnny lived a long life and had a distinguished career as a field trial dog and as a prepotent stud dog who sired many winners and champions. Our condolences to both Terry Erickson and Jerry Lewis.
Posted by Mike Spies at 8:50 AM No comments:

Summer is here and the dogs seem to know that it is time for lazing about: 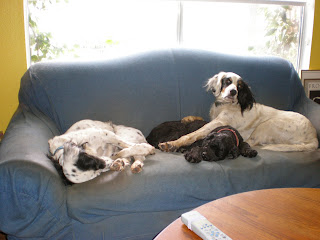 But I'm keeping busy with a few tasks that anticipate being out in the wild places this fall. Folks who run bird dogs all seem to enjoy good food and beverages (why is that?) and good cooking was an important reason for getting a trailer. But the small size of the kitchen does present a few challenges. Lack of counter space is one of those challenges but I've improved that situation with a cutting board that fits into the sink; a strainer under the cut-out catches the trimmings: 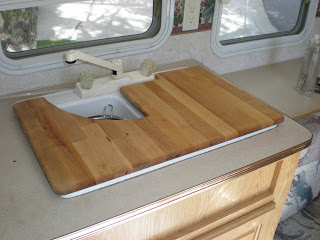 Finding a good but small roasting pan was another challenge. I enjoy a chuck roast with carrots and onions, slow cooked in dark beer, but the oven is only 6.5" tall. After touring through antique stores I found this wonderful piece of cast iron that fits with an inch to spare: 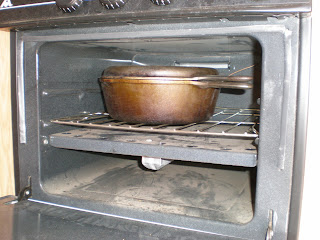 It is a very clever design. The lid is flat so it can be used as a small frying pan. The lid also pivots on a "hinge" and is quite stable when standing straight up - a nice feature in a small kitchen. 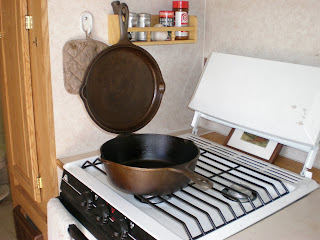 That's it from San Diego. Nothing too important, but a few small pleasures.
Take care,
Pete.
Posted by Peter Houser at 4:43 PM No comments:

Enough of politics. I apologize for so much mileage granted on this blog to the struggle to keep our dogs safe from seizure, neutering, and other affronts to decency. It is important, otherwise I would not post here.
The US Complete Shooting Dog Association Northwest Region will be holding it's first Regional Championship in early November of this year. Details will be available at the US Complete NW Region blog. This championship stake will be open to amateurs and professionals with dogs of any pointing breed, registered by the FDSB and qualified by a open placement in an AF sanctioned derby, Shooting Dog, or All Age stake. The Championship will feature one hour braces.
Hosting the event is the Santa Clara Valley Bird Dog Club.
Posted by Mike Spies at 11:50 AM No comments: