Buddy is now a year old and continues to score points with his trainer, John McIltrot of Seranoa Kennels in Broadview, Montana. John sent this photo, taken in July. I'll be heading to Montana in a few weeks for dog stuff, fishing, and a lot of bird hunting. 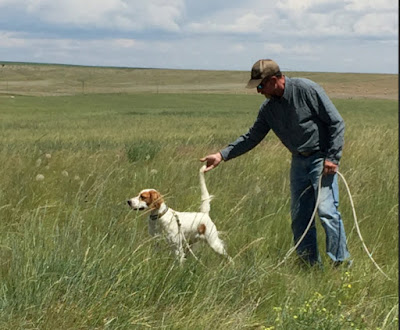 Posted by Mike Spies at 3:00 PM No comments:

Henry Atkin learned to make guns while apprenticed to his father - the first gun maker employed by Purdey when they began their business in the early 19th century. After his apprenticeship he worked in the London gun trade (likely as an outworker) and began making guns under his own name in the late 19th century at the height of widespread participation in British shooting sports. His guns were based on the same design as the Purdey guns - the excellent sidelock design first developed by Fredrick Beesley. The quality of Atkin's guns earned him a loyal following and membership in the top tier of London gunmakers. 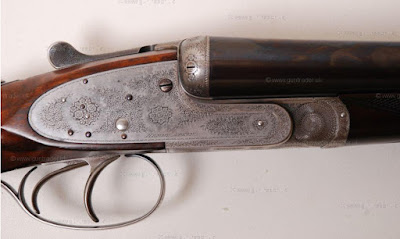 Henry died in 1907, but his firm continued making top quality guns and, in 1909, they began building guns incorporating modifications to the cocking system and ejectors, refinements on the 'Purdey" design. Over the years of the twentieth century the firm Henry Atkin Ltd. persisted through times fat and lean and kept their enviable reputation intact until 1960 when they merged with Grant and Lang, forming Atkin, Grant, and Lang, which survives to this day and is still making the improved '1909 Model' sidelock best gun. 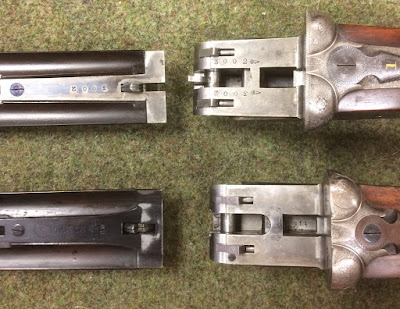 The Aktin (top) and Purdey compared.

In 1947 the doyen of British gun writers, Gough Thomas, ordered a 12 gauge Atkin and insisted that the gun be built "...to the highest prewar standards." He was very well satisfied in the gun delivered to him and shot it the rest of his life, often praising the gun in his writings.

Fast forward to me. I have been well aware of Atkin's guns for some time and was finally overwhelmed by my lust for another gun -- an lightweight, 12 gauge, spring opening, sidelock ejector Atkin gun.

This gun was made as the first gun of a consecutive pair in 1930. It has it's original 27" barrels and remains in proof after nearly 90 years of use. Weight is 6lbs., 3 oz. It is being exported from the UK and imported to the USA - a nearly incomprehensible process that reminds me of the famous 'chicken sandwich' scene from "Five Easy Pieces" with Jack Nicholson ordering a variation from the menu. I'll post up here when I do see the gun arrive.
Posted by Mike Spies at 11:50 AM No comments: