Well, it's not a classic pose, but she is certainly showing some interest in birds: 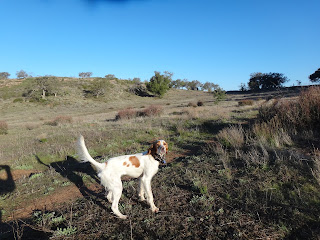 The bird is about 20' away.  She had a pretty good point as I walked up but looked at me when the camera clicked open.  I need to do more yard work to steady her "whoa".  She jumped as I walked up on a couple other birds but stopped immediately on command.  One point was over 100 feet.

Weather was good but not perfect:  clear, mid 30's, some moisture in the  ground, but a bit too much breeze.  Nice to live in San Diego.

Mike, want to come down for a long weekend some time and work the dogs?  I've got a local source for pigeons now.
Posted by Peter Houser at 3:49 PM No comments:

I just got word that Shadow Oak Bo, handled by Robin Gates, has just been named winner of the 2013 National Bird Dog Championship at Ames Plantation, which concluded today.

From the Ames synopsis of his brace:

Bo is owned by Butch Houston and Dr, John Dominy.

This is a huge boost for setters in general and should encourage more setters at the top levels of field trial competition. Congratulations are due to BO, his breeder, Buddy Smith, to Robin Gates, and to the owners. 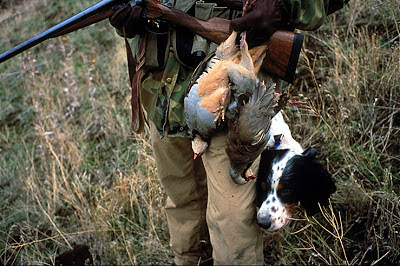 ... for the beginning of next season.

I'll find stuff to do until then - field trial, go fishing, work on the house, fix Airstream injuries, work on my old Willys flatfender... But I'll be thinking forward to the Fall.

Pete and I have talked a bit about going to Montana and Saskatchewan. I'll fill a few evenings with planning for this, but this is a flat time of year - good mostly for tying a few flies and catching up on reading.
Posted by Mike Spies at 4:45 PM 1 comment:

Well, I messed up and did not get pictures ...

I spent the fall letting Maggie run in the hills, getting into plenty of wild birds and generally becoming addicted to feathers.  Today I took her out for the first time in a controlled training session with a pigeon in a launcher and a couple friends gunning.

She pointed the first bird staunchly but was only a few feet away when she caught scent.  We flushed and killed the bird and she carried it around proudly for several minutes.

She handled the second bird perfectly.  She crossed the scent about 50 yards downwind, turned and locked up instantly.  Held point staunchly as the gunners got into position, tail high. intense, nose tugged upwind by the scent.  I flushed the bird and several shots later the pigeon was still flying briskly.  Damn, I wanted to reward that great performance with a bird on the ground, but Maggie seemed to be content with the result. 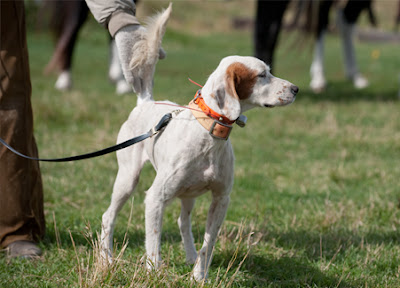 As of right now there are two apparent leaders: Shadow Oak Bo - a setter male owned by Butch Houston and handled by Robin Gates, and Miller's Dialing In - pointer male handled and owned by Gary Lester. Bo (photo above) had seven finds and three backs, finishing the three hours to the front. Dailing In had seven finds, one unproductive, and finished the three hours well.

Every year there are a few setters running and the hope of setter enthusiasts for the first setter victory since 1970 is rekindled. But there are a lot of dogs yet to run, and luck of the draw plays a huge part in this game.

Still, I am pulling for Bo.