Tommy gets his legs

After picking up Tommy from Summer camp in North Dakota on September 20th, I headed to Lewistown, Montana. I had the pleasure of hunting with Joe Augustine and his friend Florida Keys guide Lenny Moffo. Joe had his setters, Ranger, Jacey, and Sugar and I hunted Ted most of the time. I very much enjoyed the days I spent there. I ran Tommy a few times and found that he is living up to his breeding by running big and fast.
Later, when Pete Houser and his friend Bruce joined with me in the Malta area, I put the Astro on Tommy and turned him loose on a couple sections of sharp-tail ground. His first cast was to the left and forward where he stopped to point, then put up a covey of sharp-tails at about 800 yards. He then veered right, continuing out past 1000 yards and moved across the front crossing to a small ridge which he took back to complete his cast. I watched this in awe, and with some anxiety about his willingness to return. But he came back and was rewarded with a drink of water and back into the truck, since I decided that I need to thoroughly yard break him before I can handle him in open country.
I'd love to post a picture, but the fact is that I do not have a lens long enough to capture that blazing white dot waaaaaay out there. I think Tommy will be a good bird dog and trial dog, and I will hunt him when I get the handles installed.
Posted by Mike Spies at 3:18 PM 1 comment:

Recently I was able to observe exactly how Chaos Theory applies to bird hunting. One of our setters found a covey of Huns on a knoll and went on point. A second dog backed the point. Meanwhile we had three hunters walking the hillside – one above, one on the level of the pointing dog, and another below the knoll. Things started to unwind when the pointing dog relocated forward to about 30 yards from the covey. The backing dog moved forward, ahead and below the pointing dog. Meanwhile, the three hunters moved forward on different lines of approach. The hunter below saw the pointed dog and moved rapidly up directly towards the expected location of the birds, hoping to be in position for a shot on the flush. The birds were running and the dogs moved up, egging each other on to advance. The birds blew out with only a single bird taken on a long shot by the hunter approaching from below.

From my point of view this was a failure that probably could have been avoided. Instead of presenting five separate threats to the birds, we could have approached the point together from the same direction and, had the backing dog been completely staunch, we would have presented only one or two threats – and from the same direction. The birds likely would have held a bit longer under reduced pressure and offered us all a shot on the flush.

Consistently thinking through the approach to a pointed dog and helping the dog to control the birds is critical to teamwork and a successful outcome.
Further, it is my opinion that tactics used by dogless hunters – walking parallel some yards apart alá cornfield drive tactics – have no place when running a brace of pointing dogs. It suggests that we do not believe that the dogs will properly cover the country and find the birds.
Example: a few days later I was walking my setter through a likely area when he went on point as we crossed the wind at 90 degrees. The sharp-tail he was pointing was about 100 yards up wind on my right – exactly where another one of our group had decided to walk. The bird was flushed and shot by the walking hunter, who had no idea that the dog was even pointing it. Yes, we got the bird, but without the pleasure of the dog work.

Net on this is that by co-operating and running our dogs correctly we can all – dogs included – have a more rewarding hunt. 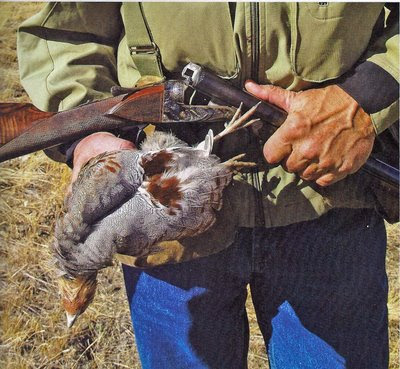 While this year showed sparse populations of chukars, we did find some reasonable coveys - not what we had hoped for, but reasonable.
The good news is that Huns seem to have held up very well, especially in NE Oregon, where we had good dogwork and shooting on numerous, good-sized coveys of Hungarian partridge. They are simply a hardier bird than the chukars.
The photo above is by Clair Kofoed, and was published in Grays Sporting Journal 2008 bird hunting issue. I sniped it by scanning the page... my 'fee' for being the model. Hope I do not get a 'lawyergram' asking me to remove it, since it is a terrific photo.
Posted by Mike Spies at 11:58 AM 2 comments: