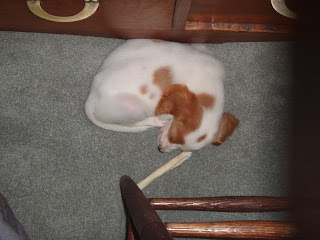 Then she started to run and get into trouble, first with a pair of coyotes: 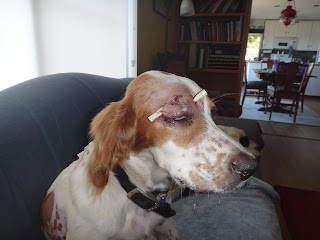 And then with a rattlesnake: 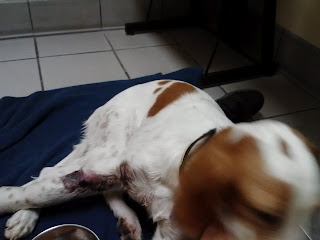 But she got past those two near-fatal experiences and today I worked her on birds for the first time.  She shows good promise: 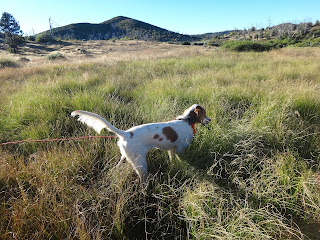 Though the bird is not far away, it is well hidden and she pointed on scent, not sight.  She held point staunchly for a couple of minutes while I played with the camera and was profoundly disappointed when I walked her away from the point with the lead.  I had her on lead because the planted pheasant was not fully mature and I did not want her to catch a poorly-flying bird.

We head for Oregon in a bit over a month and I have great hopes that she will stick some birds while we are there.  She hunts with me and responds well to commands, and I have a GPS collar  ;-),  so I should at least be able to keep up with her.

Albacore - a day off Monterey 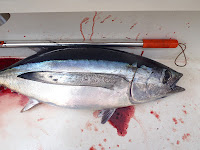 As mentioned in an earlier post, I have been spending more time fishing since I bought an 18' Parker skiff. This, of course, was the plan all along.

Wednesday the sea surface temperature, wind forecast and fishing conditions made it possible for my friend Stan and I to launch at Monterey harbor and run 25 miles out to the offshore albacore grounds. In this El Nino year the number of albacore being caught close to shore is up over past years.

So we ran out and reached the temperature break, where the water was 61 - 62 degrees and the sea showed 'offshore' blue water. Set the trolling gear (10mm tuna feathers in 'squid' colors) and about 10 am we got our first albacore. It was exciting to see such a wild and beautiful creature appear out of the depths. Shortly after we had fish on all three lines and it was chaos - the good kind of chaos.

After a couple hours the cooler was completely full of gutted, headless fish on ice, and we had three more fish head down in the 30 gallon bait tank. We were out of room for fish - save the blood covered deck. We decided to troll back to the break and head in. On the way we found a promising edge with weed, birds and current and had to stop and fish. Stan cut up our anchovy baits and squid that were regurgitated from the albacore already landed and started a chum line. Then he picked up his fly rod and cast a squid fly on a sinking shooting head while I fiddled with cleaning up the mess on the boat. Seconds later he was fast to a nice 23 pound albacore on a nine weight rod... a rod well suited to small striped bass or steelhead. Not everyday that you can hook blue water tuna on a fly rod - especially off central California. 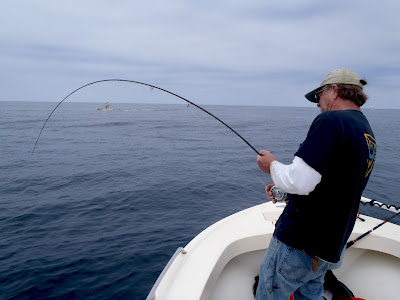 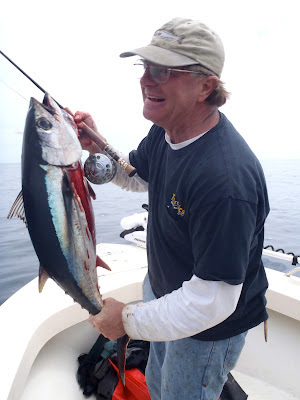 We had a wonderful day of fishing and, after processing, over 60 pounds of excellent albacore loins, filets, and belly flaps for many meals this Fall.
Posted by Mike Spies at 1:43 PM 3 comments:

Hunting and Fishing on the rise - USFWS

From the USFWS website...  they boil it all down to economics, of course, but maybe this means that President Obama and Congress will be less eager to pass laws that are detrimental to sportsmen? Maybe.

MILWAUKEE, WI – Highlighting the reversal of decades of declining numbers, Secretary of the Interior Ken Salazar today announced the results of a comprehensive national survey of outdoor recreation showing a significant increase in hunters and a double-digit increase in anglers over the past five years.

“Seeing more people fishing, hunting, and getting outdoors is great news for America’s economy and conservation heritage,” said Salazar. “Outdoor recreation and tourism are huge economic engines for local communities and the country, so it is vital that we continue to support policies and investments that help Americans get outside, learn to fish, or go hunting. That is why, through President Obama’s America’s Great Outdoors initiative, we have been focused on helping Americans rediscover the joys of casting a line, passing along family hunting traditions, and protecting the places they love.”

The U.S. Fish and Wildlife Service’s 2011 National Survey of Fishing, Hunting, and Wildlife-Associated Recreation found that hunters nationwide increased by 9 percent while anglers grew by 11 percent. Nearly 38 percent of all Americans participated in wildlife-related recreation in 2011, an increase of 2.6 million participants from the previous survey in 2006. They spent $145 billion on related gear, trips and other purchases, such as licenses, tags and land leasing and ownership, representing 1 percent of the nation’s gross domestic product.


Other key findings include:
At the request of state fish and wildlife agencies, the Fish and Wildlife Service has been conducting the national survey every five years since 1955. It is viewed as one of the nation’s most important wildlife-related recreation databases and the definitive source of information concerning participation and purchases associated with hunting, fishing and other forms of wildlife-related recreation nationwide.

Dan Richards, president of the California Fish and Game Commission, was ousted by a vote of the Commission at the Commission meeting in Fresno on Wednesday. He has been severely criticized in public media over the past few months for legally taking a mountain lion while on a fair chase hunt in Idaho (where mountain lions are legal game). 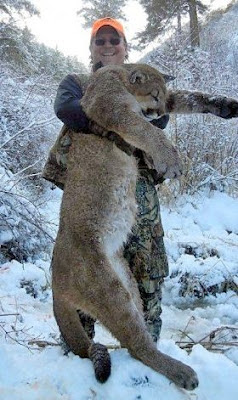 As usual, the Humane Society of the United States sought to garner whatever benefit they could from this news cycle...

"Californians have twice voted in a resounding fashion to protect mountain lions in our state, and his flagrant flaunting of his disagreement with the electorate put him out of sync with California," said Jennifer Fearing, state director of the Humane Society of the United States. "We're glad to see the commission take action."

Richards, one of the few members of the Commission who is actually a sportsman, was replaced by Jim Kellogg.  Thanks for your unpaid and unappreciated service, Dan.

File this under "tyranny of the masses".
Posted by Mike Spies at 12:37 PM 1 comment: