Found this little tidbit on the web...

DALLAS, Nov. 24--A team of scientists can verify that their 5-year long DNA study, currently under peer-review, confirms the existence of a novel hominin hybrid species, commonly called “Bigfoot” or “Sasquatch,” living in North America. Researchers’ extensive DNA sequencing suggests that the legendary Sasquatch is a human relative that arose approximately 15,000 years ago as a hybrid cross of modern Homo sapiens with an unknown primate species.

The study was conducted by a team of experts in genetics, forensics, imaging and pathology, led by Dr. Melba S. Ketchum of Nacogdoches, TX. In response to recent interest in the study, Dr. Ketchum can confirm that her team has sequenced 3 complete Sasquatch nuclear genomes and determined the species is a human hybrid:

“Our study has sequenced 20 whole mitochondrial genomes and utilized next generation sequencing to obtain 3 whole nuclear genomes from purported Sasquatch samples. The genome sequencing shows that Sasquatch mtDNA is identical to modern Homo sapiens, but Sasquatch nuDNA is a novel, unknown hominin related to Homo sapiens and other primate species. Our data indicate that the North American Sasquatch is a hybrid species, the result of males of an unknown hominin species crossing with female Homo sapiens.

I always thought that one determinant of a distinct species was an inability to hydridize with another species...OK, who is concerned enough to have some DNA work done to see if they are a little bit, well, you know?

Read the whole thing and decide for yourself


NEWS FLASH...Man dressed as Bigfoot killed on highway while trying to prompt Sasquatch sighting - You can't make this stuff up... read it HERE

What can I say? It's been raining and I am bored.

Posted by Mike Spies at 3:03 PM No comments: 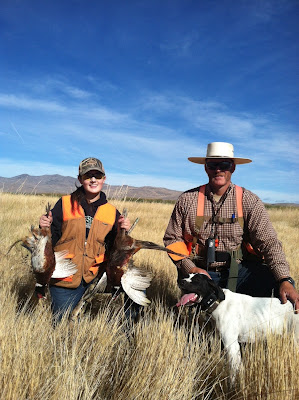 Indian Head Strike
A couple of months ago I made the decision to find a new home for Sue (Indian Head Strike).  It was apparent to me that Sue was going to be more of a foot hunting dog than a field trial dog, and finding a new home for her would give her the opportunity to do what she does best and give me the opportunity to train, and perhaps campaign, another field trial competitor.

Sue is just over two years old, steady to wing and shot, hunts and points with amazing intensity, and is a pleasure to be around.  Her lineage is about 90% Elhew and 10% Rock Acre Blackhawk. She is a great little bitch.  I got the word out and within a week Sue had a new home.  My friend Rick has a son, David, going to college in South Dakota; David lives to hunt birds, had lost his retriever last winter, and was ready for another bird dog

Sue was with me for a month before leaving for South Dakota.  I knew we needed to do some ground work with pheasant before sending her off to the big time, so I purchased a few birds and we held a couple sessions in my bird field.  The following weekend Rick's daughter Emily participated in a women's hunt at Honey Lake Wildlife Area, just east of Susanville, CA.  It was a great opportunity for me to test Sue's savvy on ringnecks before sending her off, and a great experience for Emily to hunt over a bird dog.  JT
Posted by Jared Tappero at 5:32 AM 1 comment:

This is my favorite weekend in Southern California:  dove reopens, pheasant opens, quail and waterfowl are already open.  I spent three days in the local mountains and the Imperial Valley hunting most of those species, though I skipped the ducks this year.

Pretty decent bird numbers.  Tons of dove (mourning & collared), lots of pigeons, decent numbers of both gambels and valley quail, leading to the picture below.  No pheasant this year, though in most past years I've picked up one or two.

Both the Gambels and the Valley quail are lovely birds. The Valley birds are more gaudy, but the cream and black on the Gambels, with the cinnamon on their sides, seems more elegant.

The dove yesterday afternoon were quite a challenge.  I was sitting under a tree and the birds were coming over me, up high, riding a 20mph+ wind as they moved from feed towards an urban area.  Very tough shooting, but I dumped enough to avoid total depression.  A few birds came into my tree from the other direction and seemed to hang in mid-air as they struggled towards the branches.  Of course I missed several of those easy shots, no doubt stopping my swing entirely on the "motionless" birds.

I spent this morning working a few spots in the Lagunas, trying to bag a Mountain quail to complete the trifecta.  As in past years, no luck.  Locally, the best hunting for Mountain quail is generally a couple years after a burn; the birds move into the new feed but feel protected since the burned branches provide overhead cover.  Last great year for Mountain quail was 2005-2006, have not had a good burn on national forest since then.  Patience. 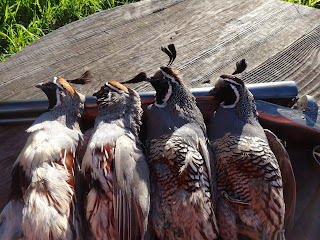 After several years of looking, I have found & purchased a 16ga Lindner Daly.  Many, many thanks to Mike & Ken for their help in the search.  I think that the action shaping complements the drop point panels very nicely. 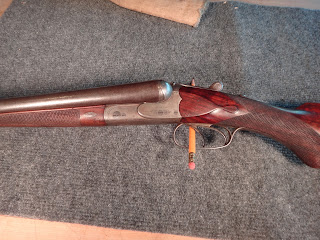 And the wood is quite pretty, though would benefit from just a bit of freshening. 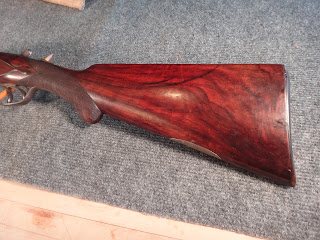 The barrels are a very nice Damascus but need to be re-browned (re-blacked actually) and do not photograph well at this point.

The gun came with a couple of interesting extras.  The leg-of-mutton case needs restoration but seems to be high-end pebbled leather.  Any recommendations for someone to do the work?

And tucked into the pocket of the case was an undisclosed extra:  a very unusual brass cleaning rod.  The handle unscrews into three pieces, revealing a screwdriver and a very small oil dispenser.  Quite a pretty little piece. 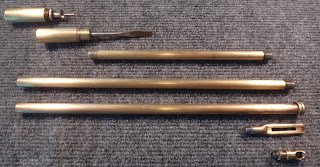 I'm quite pleased and have already killed a few birds with the gun.  I expect it will be a favorite for decades.
Posted by Peter Houser at 3:50 PM 3 comments: