Experience and correction time, and a lot of patience with the young pup and derby showing exceptional scenting ability will pay off. The best youngsters will learn to handle critical scent problems in direct proportion to the number of times they learn to stand and see birds fly, and learn how to get their mouths on a bird. They will also learn to slow their pace at the right place at the edge or “mouth” of the cone and find the best scenting area to do their job. Of course, this accounts for the specialty dogs that seem to better handle running upland game: (ruffed grouse, pheasant, Huns, Valley and scaled quail and chukar) in various environments. It also accounts for the brilliance some dogs show in rounding up a covey and/or relocating while some dogs just have an unproductive or fail to relocate.


Well worth reading the entire article.
Posted by Mike Spies at 10:23 AM No comments: 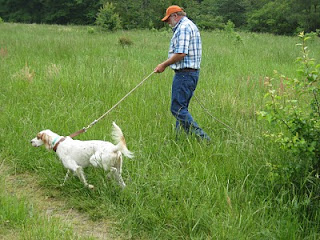 I have been seeking a training venue for Tommy, who is now two and ready for finishing. A friend, Leif Lendrop, had scheduled time to travel to SC to put his young pointer with Maurice Lindley for summer training, and suggested that I send Tommy along. So Leif took Tommy on his trip to South Carolina - thanks, Leif.
Tommy seems to adjusted to the new surroundings and has realized that there are birds down south. He will be with Maurice for the summer and should be home in time for Fall hunting and trial season.
Posted by Mike Spies at 4:34 PM 7 comments: