Due to schedules and dog requirements, I am taking my pup, Andy, to John McIlltrot at Seranoa Kennels in Broadview, Montana in early June. I hunted Andy last season as an unrestrained pup and it is time for some more formal work and tons of birds. 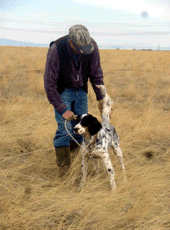 I had dinner with John during the West Coast Shooting Dog Championship earlier this year and it seems like he knows his bird dogs and we share similar views on developing setters.

Meanwhile, Cody will be heading to Travis Gelhaus at Sagebrush Kennels in Hazlet, Saskatchewan for work on wild birds over the summer. This past season Cody has shown that he is a legitimate All-Age competitor. But he is still a young dog and needs further experience and a little polishing. Trainer Sheldon Twer has done a good job with Cody and Travis can provide the big country, wild birds and conditioning that Cody needs to win the more important trials.
I'll be heading to Montana and Saskatchewan in Early June. Taking my fishing tackle, too.
Posted by Mike Spies at 12:29 PM 1 comment: