For a couple bucks a copy I found these two books on Amazon.com 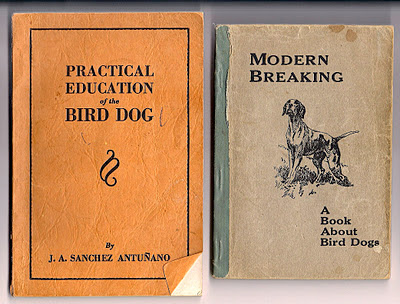 Practical Education of the Bird Dog  for Hunting and Field Trails by J. A. Sanchez Antunano
and
Modern Breaking - A Treatise on the Rearing, Breaking and Handling of Setters and Pointers - by William A. Bruette
I am always a sucker for old sporting books. I also enjoy learning a bit more about dog training. If I find something that I want to share here, I'll post it up...
Posted by Mike Spies at 2:46 PM 5 comments:

From the Idaho Statesman (Rocky Barker) --

"The U.S. Bureau of Land Management told scientists working on a $40 million study mapping ecological trends that they couldn’t look at the effects of grazing, an environmental group says.
The Public Employees for Environmental Responsibility filed a complaint Wednesday saying the BLM study violated the Department of Interior’s new policy designed to limit political interference.
The complaint is the first major test of a policy that Barack Obama promised environmental groups in the 2008 presidential election.
Obama said his administration would emphasize science over political considerations, contrasting that approach with what critics said were Bush administration officials who handcuffed scientists and subverted science on public lands, wildlife and endangered species — including keeping sage grouse from being listed as an endangered species..."

We will never have competent public land management without understanding this critical element of land use.
Posted by Mike Spies at 12:08 PM No comments: