Thanksgiving and a conundrum 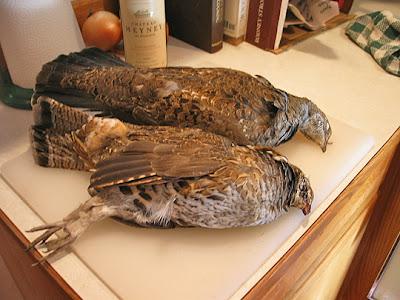 Thanksgiving – two daughters, two dinners – bloat recovery and football. Thinking of hunting.
I have much to be thankful for – family, friends and dogs. Time and enough money for traveling to places that I love to go.
So, the conundrum. When young, despite having a lifetime ahead of me, I ran from one thing to another. And the time passed quickly. Now that I am older, despite having less than a lifetime ahead of me, I am not in such a rush. And it works out that I can see more, learn more, do more... and that is infinitely more satisfying. So I am thankful. I hope that you all have the same good fortune.
Posted by Mike Spies at 3:17 PM 3 comments:

A few days in the desert

I spent the past few days hunting chukar on the slopes along highway 395, from Joberg to Independence. Had a great hunt the first day. Rosie & I worked the slopes hard for 3 or 4 hours with just one soft point to show for it - the birds ran out before I could get there. 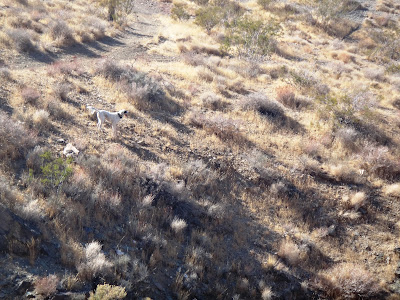 As we worked along a lower ridge Rosie caught point, facing downhill. I was already in nearly perfect position, and when I took a few more steps the birds blew out, easy crossing shots, downhill right-to-left. I don't usually try for doubles on chukar or quail (hard to find even one dead bird ...), but the first bird crumpled nicely so I took a second shot and folded another. Took 15 minutes to find them both but it was a great start to my chukar season. 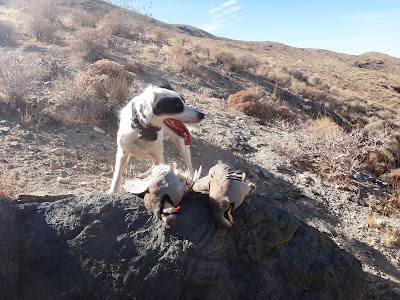 While in the Joberg area I met up for a day with Craig Fiehler, a DFG biologist who works the California coastal area. He had never hunted chukar before but I think he enjoyed the day. At least he said that he did - but perhaps just being polite. "First time for adventure, after that for revenge". We found three coveys but never got into position for a shot. 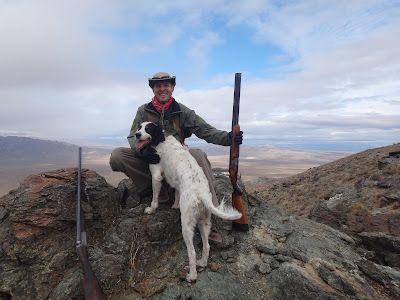 I had been playing phone tag with the Bishop DFG biologist for a couple of days and finally connected while I was on the road. He recommended the west side of the valley so I tried working some of the Sierra slopes. Got into a few quail and a covey of chukar so I'll definitely return. Tough walking though - those slopes are not for the faint of heart. 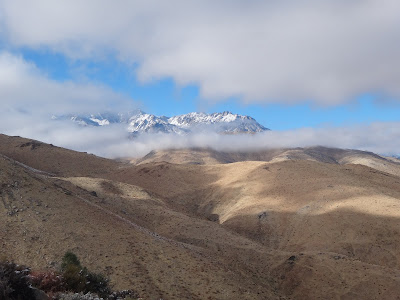 That's it for today. Off to Oregon to visit my daughter for Thanksgiving. Hope all have a wonderful holiday with much cause and opportunity for giving thanks.
Posted by Peter Houser at 8:45 AM 1 comment:

One more story on a Sunday

Yesterday was the Glorious 12th - the day on which pheasant and dove season open in the Imperial Valley. The dogs and I spent it roaming from the border to the Salton Sea, hunting and touring, having a fine time, and finding plenty of birds.

I've been shooting my Fox most of the season and decided to give my Westley Richards droplock a day's use. It is a lovely gun, an engineer's delight, and I shoot it pretty well. I started the morning hunting for dove, and though the shooting was slow, I had a handful of birds by 7.30.
I decided to try another spot and on the way noticed a lot of dove working around the intersection of four fields. The birds were feeding in three newly-planted fields of row crops but the fourth field was alfalfa and unposted. I concealed myself in a drainage canal and killed a couple more dove in just a few minutes. Then I noticed that some hunters were driving the alfalfa for pheasant and managed to put up a few birds. They had not hunted my edge of the field so perhaps a few of the roosters had moved into that area? I got Rosie and Silk out of their crates, loaded the gun with heavier loads of #6, and gave it a try.
We worked the area for 20 minutes or so without moving a bird and then I noticed a couple of dove land on the other side of a drainage ditch 200 yards away. Since the pheasant were not cooperating I dropped dove loads into the gun (I shoot very light dove loads with very small shot) and walked in their direction.
Of course I had not gone 30 yards when a big cock popped up right in front of me. I probably should have just waved at him, but instead I took a close shot with those dove loads, and hit him hard enough to kill him - but not until he had flown 400 yars, collapsing dead in mid air, in the middle of another field that was (a) posted, and (b) being actively worked by a couple of guys on fast tractors with hay rollers. I walked over to the edge and looked for an obviously-dead bird without luck. The drivers would have been very annoyed if I started combing their field with my setters so I cursed my choice of guns (most of my doubles have two triggers, but W-R was very proud of their single trigger and apparently only sold droplocks that way) and headed for other spots.
Next I was in an area with a deep irrigation channel bordered by heavy, waist-high chaparral. I've killed pheasant there before so I loaded with #6 and even managed to kill a dove with that load. Then I ran into a covey of Gambels quail and proceeded to miss 4 in a row over some decent dog work. That was quite annoying. I'm convinced that those little demons flew right through the sparse loads of #6 (I shot 4 for 4 on quail that weekend when shooting #8, so I should have killed at least a couple of them).
Now I'm feeling pretty bummed. I have a nice collection of dove, but no pheasant and no quail, and some pretty sorry stories to tell about it all. Then, redemption: a cock pheasant flushed out of canal and back over my head. Since it was first sold in 1901 the W-R has probably killed 5,000 pheasant on shots just like this and the #6's did their work. The bird was dead in the air and hit the ground in an open spot. 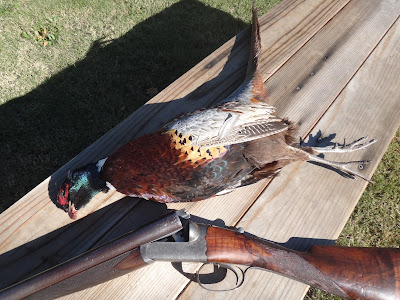 Now I could relax, give up on pheasant, and just shoot quail and dove. We got into more quail and I killed a couple, and then I found a spot for dove that had about 150 birds working the area. Killed a few more there, including a couple a long-range passing shots (60 paces to one of the dead birds) that left me feeling pretty good about the day. 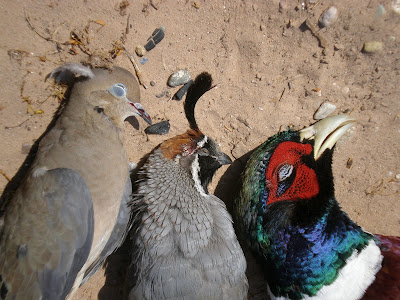 So, the lesson: shoot a gun with two triggers when hoping for a mixed bag! I have a nice thumblever Purdey that would have been a great choice. But the day came out well. Mike, wish you had been there to point out my folly.
Posted by Peter Houser at 3:44 PM 3 comments:

What are the odds?

While driving a decent dirt road in Montana in September a rear tire went very quickly flat. When I changed the tire I saw this small pebble protruding from the center of the tread: 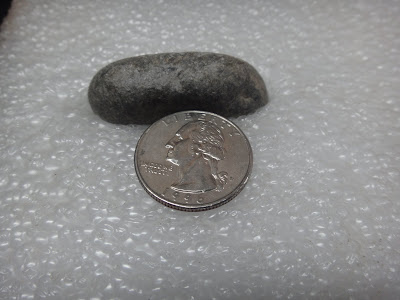 The idea that such a tiny rock could cause immediate failure had me thinking about changing my prefered brand of tires. But after Malta Tire installed new rubber I saw that the "pebble" was just one end of this: 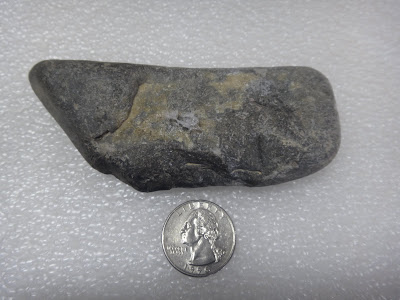 A perfect tire assasin. My best guess is that the front tire tossed up the rock which then fell in front of the rear tire in a perfect jabbing position. Nasty rock and worse luck. But I always carry two spares on a long trip, and it was about time to change out the rear tires anyway, so just a mild inconvenience in a wonderful bird hunting trip.
Posted by Peter Houser at 2:49 PM No comments: 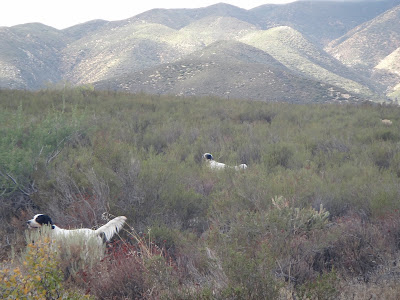 I've enjoyed some great hunts the last couple of weeks and will post a bit about them. First, a couple of weekends ago I hunted quail with Rosie (foreground, she's actually backing) and Silk (background, she found the birds first) in a area east of Julian (San Diego). The cover looks perfect, and I know there is some water around, but for some reason the bird populations are never very good. But I did get some nice work from Rose and Silk, and killed a couple of birds over their points, and had a very nice few hours walk, so who could complain? 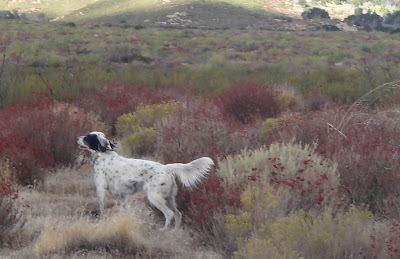 By the way, Silk will be 15 in January. Anyone have a picture of an older bird dog pointing wild birds? She has never run big, but she will hunt all day, she handles birds well, and we've killed a lot of birds together. I'd take another one just like her if I could.
Posted by Peter Houser at 9:42 AM No comments:

You know you're a bird hunter when...

You retire 10 years early with no plan other than to hunt birds everywhere they exist.

You own an equal number of shotguns and bird dogs.

Your hunting truck cost more than your daily driver.

You realize that ALL your good friends are also bird hunters.

You take your best dog and a shotgun on an elk hunting trip -- planning to shoot the first legal elk you see and spend the rest of the two weeks hunting birds.

You wife AUTOMATICALLY assumes that you have some special bit of hunting gear in mind for Christmas.

You look in you closet and you have more hunting boots than dress shoes.

You spend more time in Montana than in your second home in the Caribbean.

When you do go to the Caribbean with your wife, you are invited to shoot birds by your friends... and you go.

Your vet bill equals or exceeds your own medical expenses.

You spend your cross country flight time looking out the plane window trying to spot likely places to go in the Fall.

You realize that all your non-hunting friends have given up on you... you're getting more invites to go hunting than to attend Christmas parties.