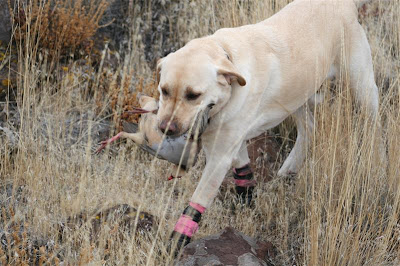 About a week ago I had to put the "Big Boy" down. Finn was suffering from Spondylosis, a chronic condition caused when bone spurs form on the spine due to progressive disc degeneration. It wasn't apparent to me that he was suffering from anything but old age, and the arthritis he had in his front elbows. But overnight, he had gone from moving around slowly in what appeared to be a somewhat arthritic walk, to being debilitated.

This past summer he had enjoyed many days on the dining deck of the "Staff House" of Laurens summer camp, at the feet of the children as they ate their meals. In true Lab fashion, not a crumb was spared. From breakfast through dinner Finns presence was enjoyed by the children and staff alike. Many nights I had to go to the deck to retrieve him. He would grudgingly follow me back to the kennel, his head slung low and moving at a snails pace.

I quit hunting him in the uplands a few years ago, as the ground was just not compatible with his aging frame - the steep rocky ground of chukar country is not forgiving. But we did have opportunities to hunt the Valley for ducks, and shoot a few doves at home. The sight of a gun and the closing of it's action still causing him to whimper, whine, and dance.

He is buried above the barn. It is where he spent most of his days when camp was not in session, acting as the official greeter to all who came to visit. His presence will be missed, memories cherished......
Posted by Jared Tappero at 10:02 AM 4 comments: