A setter in Sweden 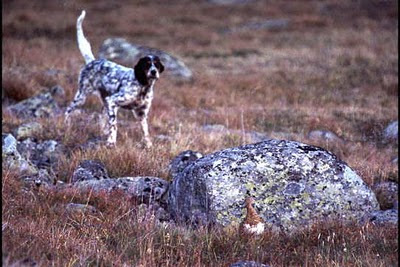 Several years ago I was homeward bound from a client meeting in Paris, and was seated next to a pleasant young woman from Sweden - an agricultural journalist, she said. Somehow (perhaps inevitably) the conversation turned to bird dogs and setters. She was a bird hunter and bird dogger and she talked to me a bit about the influence of the Smith setters in Norway and Sweden. She sent the the photo above by e-mail a few days later. I have always liked the photo and offer it here.
Merry Christmas!
Posted by Mike Spies at 9:36 AM 4 comments:

The economics of quality breeding 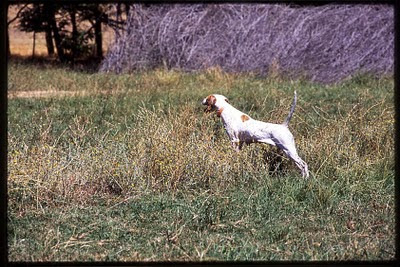 In a recent exchange on one of the Internet bird dog bulletin boards, breeder Scott Berg replied to a poster who suggested that a 'free' pup from a  casual breeder is as good a prospect for the average hunter as a carefully bred pup form a conscientious and informed breeder. Here is his (edited) response...
The difference between free and $700 is $54/yr. The difference between the (pup from) a guy in the back yard and the most experienced, accomplished, and proven breeders as compared to a backyard breeder is about $300/pup or about $23/yr over a 13 yr lifespan.

Even the most conservative estimates suggest the average person spends $600/yr to feed and care for a dog. This does not consider training cost. And, even if you train the dog yourself, equipment, vehicle costs, birds, etc are not free. It’s quite reasonable to say that we spend $1,000yr on a dog. Therefore, the additional cost of buying a dog from the most accomplished breeders in the country vs a backyard breeder equates to 2.3% of what you spend on a dog annually. It’s rounding error.

Additionally, if we consider what we spend on hunting, training, and possibly trialing I put on 20,000 miles a year doing those things. If we use the IRS estimate of 45 cents a mile that’s $9,000/yr. For a modestly serious hunter, let’s say they don’t spend a dime at shooting preserves or have a lease, between vehicle costs, hotel, shells, license, equipment, what would you estimate they spend? Obviously, expenditures vary vastly but to estimate $2,000/yr would be conservative for anyone we could call a serious hunter with the possible exception of someone with unlimited land access in very close proximity to their home and no desire to travel to other places. Between the dog and actually hunting we are talking minimally $3,000yr. In this context, 23 bucks looks very insignificant. I guess if the individual has two dogs it’s 56 bucks.

Your position suggests that relative quality is somehow improved because a breeder has one or two litters each year. There is absolutely no relevance or correlation between number of litters and relative quality. That is determined by the degree of selectivity and the quality of the selection process applied by the breeder.
For example, Breeder X could have two producing females and have evaluated four females to get those two females. This is quite common in the scenario you have posed. Breeder Y could have 10 producing females but evaluated 100 females to get those 10 females. Breeder Y has practiced 5X the degree of selectivity. Of course, the relative quality of the parents would be particularly important. I think it’s pretty logical to assume that if both breeders have been breeding for the same number of years, Breeder Y’s producing females will also be superior after having applied this degree of selectivity for a number of years. Breeder Y also will accumulate considerably more experience in the selection process over the years. Bob Wehle, taken as an example, was probably quite a bit better at this process than a guy with a couple dogs in the backyard..."
What do they say about opinions? Everyone has one... or something?
Merry Christmas!
Posted by Mike Spies at 5:23 PM 6 comments:

A good book for meat lovers 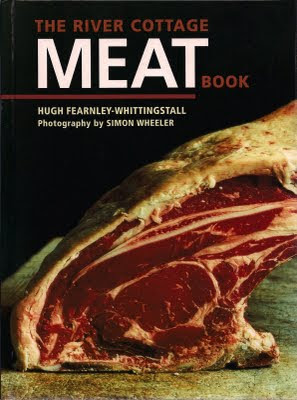 I enjoy bagging (or buying), preparing and eating meat. I offer no apologizes for this. I enjoy preparing meals and have a decent library of culinary books. Recently I was looking for a classic partridge recipe, including guidelines for hanging birds prior to cooking. A book I bought about two years ago - The River Cottage Meat Book, by Hugh Fearnley-Whittingstall (published by Ten Speed Press) has a lot of informed and practical information on cooking all types of meat, and has an excellent treatment of all types of game - game common to the British Isles, anyway. The photography by Simon Wheeler is excellent and mouth-watering.
Fearnley-Whittingstall is a hunter and dog owner (this is the connection that justifies its inclusion on this blog...), a chef, and owner of River Cottage farm. In his introductory pages he bows to the typical British sensitivity regarding animal welfare and expresses regret that some game animals are not dispatched cleanly.  A concern that most hunters also share.
"... As I pull the trigger and the bird falls, or the beast tumbles, I feel the gap between me and the quarry, which a moment ago seemed unreachable, closed in an instant."
And he does not shy away from straight talk about other possibly sensitive culinary subjects. Here is what he has to say about fat in food...
"Fat gets bad press. Because few of us want to ge 'fat', and because the consumption of 'fat' (the noun) has been identified as one possible cause of people becoming 'fat' (the adjective), fat the substance has been effectively demonized. Yet fat has a critical role in brokering the flavor of meat-not just meat, in fact, but in many of our favorite foods. That's why we put butter on our bread, beef fat in our Christmas pudding, and crated cheese on our pasta.
The critical thing is that many flavor-bearing molecules are soluble in fat but not in water. In addition, the flavorful substances into otherwise dry foods are far more effectively absorbed by the taste buds when combined with or accompanied by fat..."
On hanging game...
"The other thing to say about gaminess, besides, perhaps, that not everyone likes it, is that its level, or intensity, is not a given. It can be encouraged or discouraged, according to the length of time for which the creature has hung." And there follows an in-depth discussion of hanging (or aging) all types of game.
Bottom line, I find tis book even more useful (and inspiring!) than either The Complete Meat Cookbook by Bruce Aidells and Denis Kelly or Roasting by Barbara Kaufka, both good books in their own right.
Posted by Mike Spies at 9:33 AM 8 comments:

If you follow this blog, you have seen contributions by John Yates. You also saw a post regarding his untimely passing on September 15th of this year. John bred and trained setters. His dogs are strong in TMS and Crockett. I have seen a number of them in person, and they show their wild bird training.
His widow, Donna, is offering most of the dogs from their kennel for sale and some for adoption. Please support Donna in finding a good hunting home for these excellent setters.
Eaglerock Kennels
Posted by Mike Spies at 11:41 AM 3 comments: