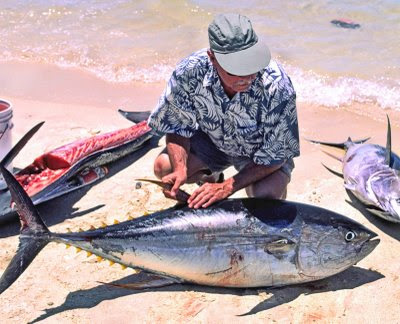 Every July I think of Baja. I have made occasional trips there, to Loreto and LaPaz to fish at Punta Arenas de la Ventanas. We have had some rare times there and caught dorado, sailfish, roosterfish, striped marlin, skipjack, bonita, cabrita, and many other species. My friend Bill Cleveland hooked a whale (a humpback, if I remember correctly) while wrestling a tuna to the boat, and the whale stripped  line until 'Pop!' and he was gone, along with the tuna.
The yellowfin tuna in the picture above was caught using conventional 30 lb. tackle trolling a live bonito, which was caught earlier on fly tackle. This is a lot like being hooked to a horse... straight out and down, then an hour or so of getting the fish in while it does pretty much what it wants. I gave this fish to my pangero, Beto, who reported the next day that it weighed 56 kilos after being bled and gutted. This is not the biggest tuna in the gulf, but I don't really want to catch any that are bigger.
We actually release most of the fish we catch, but usually give one to the pangero 'Para su comida'. The pangero can sell a fish like this one for much more than he makes taking us fishing. We usually fish from 6 AM 'til 1 PM or so, as it is very hot in July. On the ride back to LaPaz it is good to stop at a cantina in Juan des Planes and have a couple of achingly cold Modelo Especials right from the cooler. I love Mexico.      Photo by Clair Kofoed
Posted by Mike Spies at 1:41 PM