Rattlesnakes - three things that you can do... 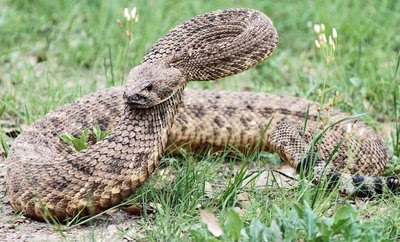 I copped this photo from a posting on the Net - it typifies the threat that rattlesnakes pose, especially to bird dogs.
I am knocking on wood as I write this because I have never had a dog bitten by a rattlesnake. But all of us who hunt in the West - and many other areas of the country - are exposed to rattlesnakes. While I do not worry much about the threat to me, I am concerned about the menace they pose to my bird dogs when hunting and even when trialing. Thousands of dogs are bitten every year and I have had a few close calls.
Rattlesnakes carry a hemotoxic venom that attacks the blood and causes swelling, intense pain, and tissue damage. They can kill a dog in some cases. Other rattlers may also carry a neurotoxin in their venom that attacks the nervous system, which is very dangerous and can cause death by respiratory failure. The Mojave green rattlesnake and the banded rock rattler are two neurotoxic species that are native to the Southwest.
Here are three things that I have done to reduce the threat snakes pose to my dogs...
1. Snake avoidance training - done with a live rattler by someone who has experience, avoidance training will definitely help reduce direct confrontations between bird dog and rattler. But this alone does not snake proof a dog because a dog can still be struck by a snake, there is always the potential for a 'drive-by' snake bite.
2. Antihistamines can reduce the reaction to a bite. I carry preloaded syringes of Benedryl (premeasured for each dog) in aluminum cigar tubes in my hunting vest. If a dog is struck, I can immediately start a remedial response to help reduce reaction and buy some time for the dog. Most vets will provide these if you explain your need.
3. The last defense is somewhat controversial. I have used the rattlesnake vaccine by Red Rock Biologics on 4 of my dogs. I have heard objections from vets (including my own) who question the safety and efficacy of this vaccine. With the exception of Jesse, none of these dogs has had the slightest negative reaction to the vaccine. Jesse's muzzle began to swell rapidly within an hour of receiving the vaccine, and I gave him a shot of Benedryl. Within about 2 hours the swelling was nearly gone, and he recovered fully within 24 hours. He has not received any additional vaccine.
According to Red Rock Biologics, "This vaccine works extremely well at getting dogs to generate protective antibody against rattlesnake venom. These protective antibodies start neutralizing venom immediately. This means that vaccinated dogs experience less pain and have a reduced risk of permanent injury from rattlesnake bite. Veterinarians typically report that such dogs experience less swelling, less tissue damage and a faster recovery from snakebite than unvaccinated dogs.

Factors which may influence antibody effectiveness against venomous snakebite include: the type of snake, location of bite and amount of venom injected; how well the dog has responded to the vaccine and the length of time since the last dose of vaccine was given to the dog.
This rattlesnake vaccine was developed to protect against Western Diamondback Rattlesnake venom. It is most effective against this snake's venom. Venom from many other snakes found throughout the United States is similar to the venom of the Western Diamondback Rattlesnake. Because of these similarities, this vaccine also provides protection against the venoms of the Western Rattlesnake (including the Prairie, Great Basin, Northern and Southern Pacific Rattlesnakes), Sidewinder, Timber Rattlesnake, Massasauga and the Copperhead. This vaccine provides partial protection against the Eastern Diamondback Rattlesnake. This vaccine does not provide protection against the Water Moccasin (Cottonmouth), Mojave Rattlesnake or Coral Snakes. Red Rock Biologics is developing a variety of vaccines to provide the best protection against poisonous snakes for dogs in each part of the country."
While some do question its effectiveness, there is much anecdotal evidence that it substantially reduces reaction to a rattlesnake bite. My feeling is this; if it buys me time to get my dog to a vet for treatment, I will use it. If your vet does not have the vaccine, it is available in trays of a dozen (I think) doses from distributors, and single doses may the ordered by your vet directly from Red Rock Biologics. Cost is about $30 to $50 per dose at your vet.
Rattlesnake strikes are always an emergency, and the dog should taken to a vet immediately. But we are often many long miles from a vet, and additional time bought by the use of antihistamines and vaccine increases the likelyhood of survival without crippling after effects.
Posted by Mike Spies at 12:00 PM

The free Snakes pictures,Snakes videos and more types of snakes About Us in the http://www.snakes-house.com/

I hate snakes and have seen them in October hunting sharp-tailed grouse in Wyoming!!!! I have treated a number of dogs and a few horses for snake bites. I have not seen a dog die yet that was treated in a fairly immediate time after being struck. I have seen dogs that didn't swell for several hours after invenomation nor could you (I) find any fang marks. If you suspect a rattle snake bite, make sure your vet does a blood smear under the microscope to look at the red bloods cells. They can change shapes/morphology in the presence of venom...this simple diagnostic test can aid in the decision to use antivenom or not...and it may just save your bird dog's life!

My current recommendations are to immediately administer antibiotics and base the rest of the treatment plan on the dogs rattlesnake vaccine status.

Thanks for the professional veterinarian advice. I am not a vet, so I really hesitate to post information that I do not have first hand information on.

My focus is ALWAYS to treat as soon as possible, and get the dog to a vet ASAP. Many of the remote places that I hunt (Nevada, Eastern Oregon, Montana, Texas, etc.) mean that veterinary care is often an hour or more away. Sometimes a lot more.

Perhaps there are additional actions the hunter in this situation can take that will reduce the possibility of severe damage and buy time to get the dog to a vet. If either, or both, of you would like to contribute a post on tis or related first aid subjects, please let me know, as your insight would be most welcome!

Very in depth post. You deserve all positive feedbacks you are getting