Goodbye Toby, and thank you 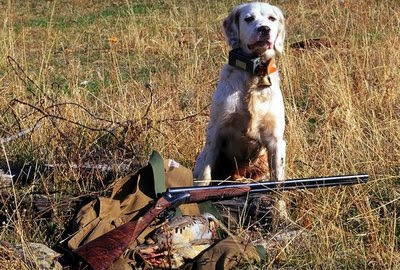 Mike's October Toby - Febuary 17, 1994 - August 11, 2008
It is always difficult to say goodbye to an old friend.
I remember Toby as he was in his prime, when he roaded a covey of chukars over a quarter mile along the steep breaks of the Grande Ronde River, pinning them in a depression and allowing me the rare opportunity for a triple on a covey rise. He was descended from dogs like Michigan Mac, CH Amos Mosley, Sam L's Skyhigh, CH Mail Order Bride, and was sired by 14X Ch Millpond Tom. He was a much better bird dog than I had a right to expect, and I am very grateful for that. Toby taught me a great deal about bird dogs and bird hunting - and about trust.
In recent years Toby developed arthritis in his hips, eventually losing much motor function and finally, the ability to walk more than a step or two. I made the decision to send him along and so yesterday he had a peaceful death while I held him to me.
It is always difficult to say goodbye to an old friend.
Posted by Mike Spies at 8:46 AM

Very sorry for your loss.

A sad day indeed.......The last time it was necessary for me, I couldn't stop the tears from rolling down my cheeks.

Its obvious Toby was loved and appreciated and I'm sure he knew it. Hold on to the memories....

Thank you all for your expressions of sympathy. I am trying to get over the pain, and on to the memories part.

There is always this down the road with any of our dogs, but I would do it all over again in a heartbeat.

Sorry to hear about your loss.

I'm very sorry to hear about your loss of Toby! He must of been one hell of a bird dog! Thank heavens for the Rainbow Bridge! I wish their lives were much longer!

Mike: sorry I was out of touch for a couple of days there. in any case, helping our dogs leave this world with grace, dignity, and love is the last great gift we can give them. Toby had a long, happy life with you -- and he'll be waiting when you get there.

thank you all, again. I just need to get a little distance on this, and keep memories of Toby close.