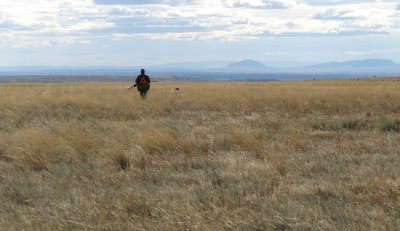 Last Fall I was hunting in Montana with Pete. Approaching one of Ted's points, and with my eye on Ted instead of the ground at my feet, I stepped in a badger hole and down I went. No, I wasn't running. In any case the barrel of my old Fox 16 struck a chunk of granite, probably the only rock in ten square yards. Result was a small dent in the barrel. I have used this old gun hard for fifteen years, carried it for many miles, and put probably 100,000 rounds through it hunting and in practice rounds.
In anticipation of the upcoming season I dropped the gun off with my gunsmith, Pete Mazur, for dent removal and a re-blue of the barrels. I picked it up today. Pete, being as observant and picky as any top gunsmith should be, found a few other things that also needed attention - so he went to work. He removed the dent, and polished and re-blued the barrels. Then he polished and re-blued the trigger bow, polished and nitre-blued the triggers and safety button, replaced the top lever trip, carefully repaired a small dent in the solid rib, found and repaired a tiny crack in the forend wood, and lastly applied a couple coats of finish on the stock and re-cut a couple dings in the checkering. About 20 hours of skilled work. It looks great, and will get get after the white-wings near Mexicali next week.
It is very hard to find a gunsmith capable of this level of quality work, and when you do, take good care of the relationship. Thank you. Pete!
Posted by Mike Spies at 6:06 PM

Where are you in So. Cal.? I am in Oceanside. Are we close?

Oops! I just noticed that Mike wrote the post. Any of you guys in my area?

Pete: Are we within shouting distance? I am in Oceanside just south of Camp Pendleton. I shoot skeet and 5 - stand there. I also belong to San Diego Shotgun Sports Assoc. at Mira Mar Marine Air Station. Do you ever shoot at these places?