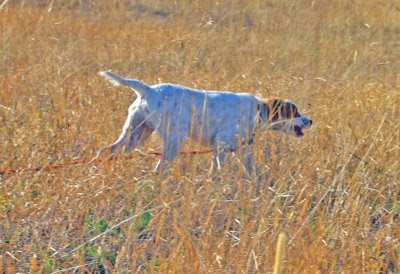 There are many questions and ideas about developing a puppy or young dog. There seem to be two fundamental approaches. One is to get control of the pup early and not allow it to learn any bad habits (things you don't him to do), and the other is to allow the puppy to be a puppy, learn about the world and to get experience with birds before beginning disciplined training.
It could be that my experience with setters has shaped my approach to this important stage of development. Setters seem to mature a little more slowly that some other popular breeds, at least that is the common wisdom. I much prefer to take a young dog to the field and let it run and learn without restraint. But I like to get some double benefit from the early field time... I want to begin teaching the pup to handle and stay in touch.
I just put a short check cord on their collar (to let them get used to the check cord, and so that I can catch them when it's time to head for the truck), I let them drag the check cord and I walk behind them and observe their reaction to the world. Pups typically run after anything interesting, but are afraid to go out too far from your protection and security, and quickly come running back after a short dash.
After a few sessions, I put a longer check cord on the pup and start to keep the pup in front of me by turning when he turns. It is usually possible to determine when the pup will turn, and when he is about to make the turn, I blow a double toot on the whistle and immediately turn with the pup.  Soon I start to pick up the check cord, turn the pup towards some likely cover (where he probably wants to go anyway) and blow the double toot. Through practice and repetition over the period of several weeks, the pup will learn to stay to the front (where all the birds are), take his cue from me, and turn with me on the double toot the whistle. If he starts around behind me, I grab the check cord and reel him in, and gently send him forward again. I don't holler or scold the dog, just quietly turn him back to the front. This is the beginning of handling and is 'trained' without any force. It starts out as me following the pup, and ends up with the pup to the front, but taking his direction from the way I am walking, alerted when I toot toot on the whistle. Soon the whistle is only needed to signal the dog when he can't see me. Don't signal or handle the pup as long as he is where he should be and is hunting.
Getting the pup into wild birds is of primary importance. I do not like to expose a puppy to planted birds at this stage - he might catch one - or have some kind of event that will make him afraid of birds. The pup cannot catch wild birds, and if he is beginning to handle and gets into birds, he learns that this is where he wants to be. I never stop a pup from chasing at this point.
This is when I like to introduce the gun. I do this when we are walking and he finds a bird, flushes, and chases it. When he is a good distance away and the bird is still flying with the pup's attention focused on the bird, I fire a starter pistol or my shotgun. He will be busy with the bird and likely not react. If he stops and looks back at you, just act unconcerned - as though you didn't hear anything. I only do this a few times and when the pup is at a distance, gradually firing sooner when the pup is closer. I have never had a pup that had a problem with this, but if I did, I would stop the shooting and wait for the pup to mature further.
When the pup learns that he cannot catch birds, his pursuit becomes shorter and he will begin to stop or pause before chasing, and he may start pointing immediately. In some pups the pointing instinct is manifested early, others take longer. Any decently bred pointing dog is going to begin pointing eventually, and an early lack of pointing is no indicator of the quality of the finished dog.
If you keep at it, the young dog will start to stand his birds long enough for you to get up beside him and take the check cord in hand. Now you can gently restrain him when the bird flushes. This is the time to move to a training field with controlled set ups using planted birds and a check cord to begin training steadiness - a whole different subject.
All of this early field work is done in parallel with yard training - teaching the pup the simple commands of HERE, HEEL, and WHOA - which should be done in the yard, not in the field, and without birds.
I've found that taking this approach and keeping the young dog with me as much as possible - in my house and in my office during the day, riding in the truck, and so on - results in a dog that will handle naturally, wants to stay in contact and please me, and that is not afraid to go after birds with fire and enthusiasm - a solid foundation to build on.
Posted by Mike Spies at 9:55 PM

Great stuff! The blog gets better with every post.

Any update on Tommy up north? My derby is on her way to Canada as we speak. Can't wait for fall...

I got an update last night and Tommy is doing well - running wide and handling. Says that he is bird crazy, but not pointing much yet. They are working on whoa breaking. I am looking forward to getting out there at the end of September and working with him before heading to Montana.

I think that once I start shooting birds over him, everything will come into focus.

Mike, your method is one I subscribe to and prevents putting to much pressure on a pup as well as enjoying time in the feild with a young dog. I've had the most enjoyable off-season and will be shooting wild birds over a 10 month old Setter that will not require an e-collar. Enjoy your blog quite a bit..Thanks