Approaching a dog on point 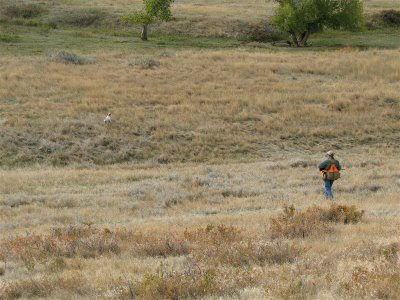 Approaching a dog on point is a subject I do not see discussed much, but it has an impact on success in both hunting and field trialing.
A couple of points... never run to a point. I see this every season... someone who thinks the birds will get away if he doesn't hurry, forgetting that he is carrying a loaded gun and putting pressure on the dog. It is best, I think, to take a few seconds to look over the situation and think about where the birds may be holding, the wind direction, and the likely direction of the flush. This will assist in planning the approach and flush. Then you can walk up to the point with a plan.
When possible I avoid approaching a pointing dog from the rear because it may put pressure on the dog to move, and he cannot see you approaching. Moving in ahead of the dog at an angle between 45% and 90% creates a pincer movement, blocking part of a possible escape route, usually allows the handler to see the dog, allows the dog to see the handler, and tells the dog to stay put while flushing. It also allows a safer shot after the flush.
When chukar hunting dogs often point facing birds below - sometimes a steep slope. In these situations I try to move to the side about 10 yards, and move quietly downslope beyond the position of the dog by 20, 30 or more feet. Then I move towards the covey's likely holding area. When done right (which occasionally happens) the birds are trapped between me and the dog, and will flush overhead offering the best of all chukar shots. More likely, however, the birds will fly before being trapped, and offer the shooter the next best shot - a downhill crossing shot. In these situations approaching the flush from behind the dog will often result in a straightaway flight going out and down. The out and down shot is almost a snap shot as the birds go over the edge of the slope and disappear downhill. You will often end up taking a quick shot over the dog's head - tough on the dog's nerves at best, and dangerous at worst - and a poor shooting opportunity.
In field trials you should obviously avoid flushing the birds over your dog and creating a temptation he may not be able to resist.  With planted birds you also want to get the bird in the air quickly and avoid a prolonged flush and possible let down in the dog's intensity, and to avoid having birds running around on the ground where the dog can see them.
Posted by Mike Spies at 4:38 PM

Great post, Mike. Up here in the northeast where you're very often contending with close trees, I am often looking for the best shooting lane through those trees when I walk up on one of our dogs. Where possible, the pincer movement has proven especially useful when dealing with running birds. Your comments about running up on a pointing dog should be underscored. Why run? At worst, you don't give your dog the impression that you trust him/her to hold a point, in addition to creating a potentially very unsafe situation; there is no best case scenario at best, you wind yourself before taking a shot.