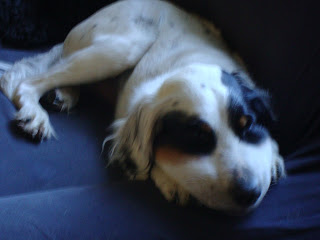 My setter Rosie is a walking disaster area. Boundless enthusiasm untempered by even a shred of common sense. She's been stitched more times than any other dog I know - probably twice as many times - and now has endured her second snake bite. She looks truly pathetic in this picture - oh the ignominy that a regal setter should look like a sharpei.
She was bit yesterday evening (Friday) and today (Saturday) she seems to be recovering well. She gets rattlesnake antivenom every August and perhaps that is a factor. Much more swelling this time than last so the vet gave her one round of antivenom and more benadryl, plus lots of antibiotics.

Somehow, she's never been skunked or slapped by a porky. She does truly hate coyotes and attacks every one she sees. I saw her roll one a year or so ago, and it then took off even faster. She's got 10 ounds on them so one-on-one they don't stick around.

I've never seen a snake out so early in the year here around San Diego. We've had several weeks of cool weather, but recently it has warmed into the 70's and that apparently brought them out.
Posted by Peter Houser at 4:05 PM

Suddenly noticed that this stands in contrast to Mike's observations about "intelligence in dogs". Some dogs never learn! About some things anyway.

Pete, Rosie looks miserable. She is a terrific bird dog, but her enthusiasm remains untempered by experience, as you say.

I hope that she recovers quickly. Give her a hug for me.

Never had a dog snakebit before. Have had a couple run with the coyotes though; pretty ammazing, a little scary. Hope your girl come out of it OK. JT

Sunday morning: swelling is coming down, appetite is good, she's on the mend. She appreciates all hugs & pets, even surrogate ;)

Glad to hear your girl is recovering. The Red Rock rattlesnake vaccine is a Godsend. I would also consider some snake breaking sessions - a bite in the snout is seldom a "drive-by" strike.

Yes, a snake break session is likely on Rosie's list for the spring. There are a couple of trainers locally who will do it.

Pete: glad to hear Rosie's doing better. Was saying to a friend at a trial in VA this weekend that as much as I like western spaces, I really like not worrying about snakes. Then a 6' piece of tree fell on my young dog, scaring him shitless, but as far as I can tell only glanced off his side. (He has some swelling around the back edge of his shoulder, a blood bruise on his ribs -- and is currently wrestling the hell out of his brother.)

Our dogs have fought off coyotes here, too, though... in the Bronx.