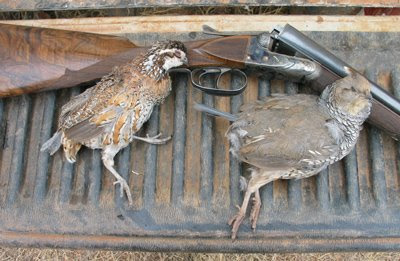 In the 2006-2007 season and again in 2007-2008 I was the guest of Mr. Mark Copeland at his West Texas quail lease in the Caprock country near Post, Texas. This was my first sampling of the whole Texas quail hunting experience. Addictive adequately defines it. 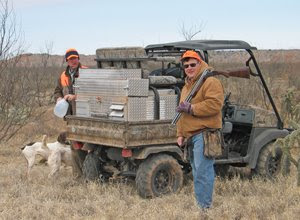 The first visit was in early February and the temperature remained below freezing during the entire time I was there. But the bird numbers and quality of hunting made the days seem balmy.  The lease is about 17,000 acres and is shared by half a dozen members, but at any time there are seldom more than four or five hunters on the ranch. During the time I was there in February of 2007 we were routinely finding between 35 and 40 coveys per day. I had my setter Ted with me, and Mark ran his two shorthairs, Libby and Princess. The dogs were into either bobwhites or blue (scaled) quail almost continuously.
The country we hunted had very tough ground cover - prickly pear and cholla cactus, and mesquite over 6 feet high. The dogs demanded frequent attention, and a Leatherman Tool was essential for removal of cactus and mesquite spines. The cholla cactus is especially nasty, since it breaks off in little clumps and clings to the dogs coat. Even a tough pair of Filson chaps was not a guarantee of safety from the thorns. With this is mind, I can find no fault with the near universal practice of following the dogs on a  Kawasaki Mule and dismounting to flush for the point. 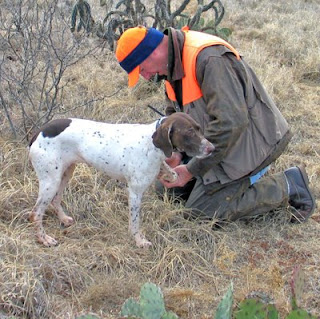 In Fall of 2007, Mark was our guest at camp in Eastern Montana for a week of sharptails and Huns. Both Pete and I were invited to join Mark in January of 2008 for a few days quail hunting at his lease. Texas quail country had been suffering a drought that ended with torrential rains in the late Summer. As a result of the heavy rains, the cover at the ranch was thigh deep grass with plenty of prickly pear cactus hidden below. The dogs had a difficult task getting birds pointed in the heavy cover - with plenty of cover, the birds would run out from under a point. Still, we did well my the standards of most quail hunters with double digit covey contacts most days.
The rough cover, the variable temperatures and the difficulty that the dogs experience pales to nothing because this is wild quail hunting with numbers that are difficult to match anywhere in the United States, and the country has an engaging savage beauty that seems to fit the challenging birds. I love this hunting, and would join a lease in West Texas or the Panhandle if it was not so far from my home.
Posted by Mike Spies at 11:59 AM

I love to hunt quail in Texas! I have a client with a large cattle ranch near the Canadian River! We hunted quail on her managing partner's ranch and moved 50 coveys during that day! What a day!!!!

That makes the 8 covey days in KS seem minor...but I love quail and pointing dogs!

I too have experienced a Texas hunt on a ranch near Waco. Incredible is the only way to describe it.

The best part however is that we hunted from horseback. There is nothing better than riding to a point or turning a dog than being on the back of a fine Tenessee Walking Horse.

"Even a tough pair of Filson chaps was not a guarantee of safety from the thorns. With this is mind, I can find no fault with the near universal practice of following the dogs on a Kawasaki Mule and dismounting to flush for the point."

How does this fit in with the argument that walking trials are for hunting dogs and should be from foot only? Sorry couldn't resist. At any rate - you sure know how to put the bird in bird dog! Sure beats the Beltway Blues over here!

If I walk these guys think I'm weird... when in Rome, etc.

Nothing better than dogs on wild birds Mike. If they are on point they are handling just fine for me. And your not fooling me. As much time as you spend in Rome I think I will mark you down as one of the Legions - Some day!