As close to politics as I want to get on this blog... 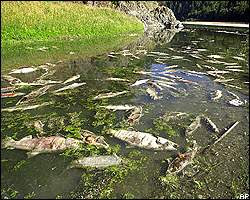 In an article reviewing the role that VP Dick Cheney played in the Bush Administration's environmental policy and decisions, I found a vindication of what I long ago came to believe was a purely White House driven political act - the de-watering of the Klamath River to levels that provoked the death of an estimated 100,000 salmon.
This makes me 'right', but it does not not make me feel any better. Perhaps we should all feel worse that it is possible for a single man to countermand legal safeguards put in place by the legislature at the recommendation of unbiased scientists.
And the valuable crops that had to be saved for the Klamath basin farmers? Mint. That's right, the stuff used to make mint juleps, chocolate mint ice cream, tooth paste, and chewing gum.
Posted by Mike Spies at 1:09 PM

Before making any judgement I'd like additional information. I'll google it but if you have any resource you can point me to, I'd appreciate it.

I have worked very hard with organizations that seek to protect Michigan's cold water fisheries and know first hand there are always mitigating factors involved and trade-offs necessary.

Thanks in advance for whatever information you can provide.